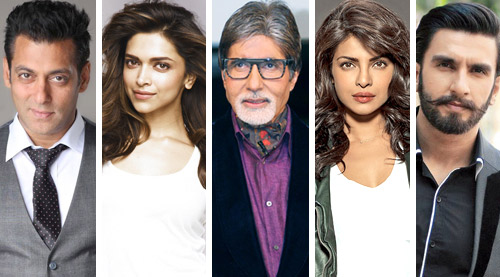 1. Salman Khan: Newsmaker par excellence. Headline-grabber extraordinaire, Salman Khan was in the news in 2015 for all the right and wrong reasons. While the court cases

occupied much of the year, his two 300-crore plus blockbusters Bajrangi Bhaijaan and Prem Ratan Dhan Payo saw him go for a complete image-revamp, playing the kind of empowered

sanskaari hero that the powers-that-be would approve of. No matter what he did Salman made news this year.


2. Deepika Padukone: Stunning performance in Imtiaz Ali's Tamasha, followed by a bravura turn as Mastani in Sanjay Bhansali's Bajirao Mastani, both within a month of one

another. Earlier during the year Deepika dazzled as the Big B's beleaguered daughter in Shoojit Sircar's Piku. Oof, awards doon toh kissko? Deepika is definitely the female star of the year.

3. Amaal & Armaan Malik: The two musician brothers still in their early 20s created a sensation with their title song in Hero and then later 'Main Rahun Ya Na Rahu' for Emraan


4. Amitabh Bachchan: Forever a rock star. Though one worked and the other didn't, the Big B was equally dazzling in R Balki's Shamitabh and Shoojit Sircar's Piku. The Big B

also rocked on television once again hosting Aaj Ki Raat Hai Zindagi the television show with a conscience. Yup, the Big B is unstoppable.


6. Priyanka Chopra: From Quantico to Kashibai (in Bajirao Mastani) what a staggering range of interests this girl covered during the year! Her indefatigable energy level makes

Priyanka the female Shah Rukh Khan of the entertainment industry. Surely she has many more peaks to conquer and miles to go in 2016 before she slips up.


7. S S Rajamouli: The Bahubali blitzkrieg swept across the country. For showing Bollywood and Hollywood what levels of spectacle Indian cinema can achieve, for giving us the most

dazzling fantasy-adventure film of all times, the humble and hard-working Rajamouli qualifies as the Entertainer Of The Year.


8. Nawazuddin Siddiqui: from the unsung hero in Ketan Mehta's Manjhi- The Mountain Man to the dark and desperate villain in Badlapur, and then just when you though Nawazuddin

couldn't surprise any more he came up with another glorious scene stealing performance as Salman's helpful journalist-guide in Bajrangi Bhaijaan...there seemed no end to what this chameleon


9. Varun Dhawan: From the vendetta-seeking white-collar Citizen Pain in Sriram Raghavan's Badlapur to the Dancing Deva in ABCD 2 and at year-end Shah Rukh's kid brother in


10. Ranveer Singh: Wah, Bajirao, wah! Just like Ben Kingley is the cinematic face of Gandhi, Ranveer now owns Bajirao. Not only this monumental triumph at the end of the year, earlier during

the year Ranveer was in splendid form as Priyanka Chopra's brother in Zoya Akhtar's Dil Dhadkane Do. Brother or husband, dude, you rock!