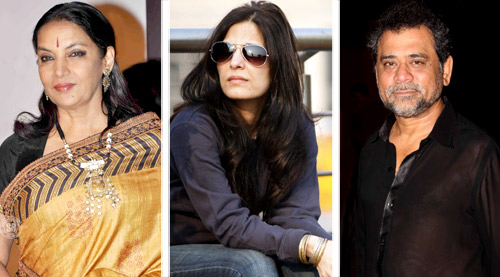 Over 35 authors and litterateurs writing in various Indian languages have returned their Sahitya Akademy award in protest against the growing cultural intolerance in the country and the increasing political interference in the arts. Bollywood writers and activists react to the protest.


Shabana Azmi: "It should serve as a wakeup call for the government that the shrinking space for freedom of expression is a real cause for concern. Instead of deflecting the debate to why the writers didn't do so earlier let's stand up and smell the coffee! The PM's silence on the issue is being construed as tacit approval. It also makes it bad for business. Why will companies invest in an atmosphere of strife and instability? Dissent is a democratic right and to stifle it by violent means is unacceptable. All governments including the Congress and the Left put their own people in Institutions. What is inexplicable is why the present government is getting under-qualified people in key posts?"


Juhi Chaturvedi: "Growth of a civilization...the development of its cultural ethos is measured by the expression its thinkers and philosophers have. If that freedom is curbed, history has always witnessed an uprising. Returning of the awards is perhaps the sign of that uprising yet again and the most apt indeed. I respect their form of protest. I think they are doing right...just see aaj kya kya ho raha hai desh mein. Art ko politics se duur rakhna chahiye, I feel."


Anvita Dutt: "I respect their token protest. But I am afraid that tragic as it may seem, it would have no effect."


Ila Bedi (co-writer of Karan Johar's Agneepath and granddaughter of Urdu-Punjabi literary giant Rajinder Singh Bedi who wrote the dialogues of classic films like Bimal Roy's Devdas, Hrishikesh Mukherjee's Satyakam, Anuradha and Abhimaan, also directed Dastak and received the Sahitya Akademy award in 1965 for his novel Ek Chadar Maili Si): "I second the litterateurs' decision to return their Sahitya Akademy awards. This is a silent protest done with dignity. I was tempted to return my grandfather's award. But it's not mine to return. But if he was alive I am sure he would have returned his Sahitya Akademy award. He was secular and known as a progressive writer. He was a Sardar who had mastered the Urdu language and script. How much more secular can it get?!"


Anees Bazmee: "I think these literary giants are doing the right thing. Just look at what's going on around us! Aaj kya-kya ho raha hai desh mein... Art should be kept as far away from politics as possible."


Rajat Arora: "This action by the esteemed writers will compel the government to clear their stand on the current state of affairs. The PM has spoken on the issue. We hope to see some positive outcome soon."