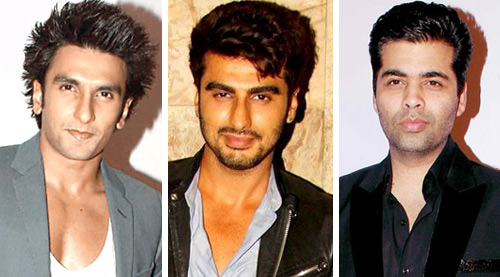 Some loved it, some hated it but nobody could ignore the concept of the AIB roast. Bollywood, which is often known as 'humourless', decided to get roasted amidst a panel of people and how! Ranveer Singh, Arjun Kapoor and Karan Johar were at their wittiest when they went on stage to crack the most possible insulting jokes not only on each other but even upon themselves for the AIB Knockout. Of course after going up on the internet, the show has found itself in the middle controversy due to its colourful language. However, while Karan, Ranveer and Arjun showed the guts to get roasted amidst an audience of over 4000 thousand, we take a look at some other celebrities who can make this roast experience worth a watch!


Kamaal R Khan: Well, controversy's favourite child Kamaal R Khan ought to be on the top of the list. The reason for him being the part of the show is very obvious and surely, his 'fan following' on Twitter will be more than happy to see him getting roasted! However, we would like to add a twist in this. Adding Sonakshi Sinha and Lisa Haydon to the panel of people who can roast KRK will surely add to the audacious humour. What say?


Aamir Khan: Deviating from the image of a social activist and a perfectionist, we would like to see this Khan put down his guard as he indulges in some 'unapologetic' humour. Imagine Aamir Khan getting roasted on stage with Karan Johar as the roast-masterâ€¦ a sight worth watching!


Alia Bhatt: While she was anyway dragged in the roast for Arjun Kapoor and Ranveer Singh, since she was in the audience, we had love to see Alia Bhatt reacting to the jokes being cracked on her! She is experienced on that front (Alia Bhatt Genius of The Year video) and can take it with a pinch of salt and of course, having all memes about her being cracked on one platform will be the epitome of the 'ROFL' moment!


Ranbir Kapoor: He is a superstar but this boy has got a sense of humour and a witty one at that! We have seen glimpses of it during his public appearances and on TV shows! So, how about roasting the man who wants to keep his lips sealed about his alleged affair with Katrina Kaif!


Salman Khan: Eligible bachelor, police cases, boycott by photographers and a 'Virgin' - Salman Khan and his never ending association with controversies will make his roast 'meatier'!


Farah Khan and Sajid Khan: What better than having the funny man Sajid Khan himself on the platform reciprocating to the kind of nasty remarks he is being subjected to! Accompanying him on the chair could be his sister Farah Khan. People would surely have many comments to make on their films. Isn't that enough to get roasted already?

Grand Masti trio (Aftab Shivdasani, Vivek Oberoi and Riteish Deshmukh): Grand Masti was the first sex comedy to enter the 100 crore club! And now Aftab, Vivek and Riteish are gearing up for its third installment. The trio who got famous due to their sex-comedies, and hence it would be fun to see some of it happening live on stage in their roast!


Aishwarya Rai Bachchan: The quintessential Bollywood 'bahu' can let her hair down for once and go beyond the self imposed confines of her sophisticated image, where we can get to see the former beauty queen being a part of a roast. After all, there's so much that one can talk about.


Shah Rukh Khan: He is a witty host and we all know it! He knows to laugh at himself and has even taken 'homosexual' jokes thrown upon him in his stride! So when we get to see two great orators, SRK and KJo get down to this kind of humour, we can picture the ruckus they will create on stage!


Sonam Kapoor - Deepika Padukone: Do you remember how controversial it got when the duo came on together Koffee With Karan? From Sonam's film career to Deepika's affairs, there's so much material to a show with these lovely ladies. To spice things up further, make Ranbir Kapoor sit in the audience. A sight you wouldn't want to miss!


Akshay Kumar and Twinkle Khanna: 'Mrs. Funny Bones', that's what she likes to call herself! How about testing it by doing a roast on her superstar husband Akshay Kumar with Twinkle as the roast-master. We would love to see that one.


Rakhi Sawant - Mallika Sherawat: One is desi and the other is wannabe videshi! One likes to give 'insaaf' and the other gets entangled in 'dirty politics'! Item numbers and exposing ghagras are their thing. Now wouldn't they be the perfect patakas on stage?