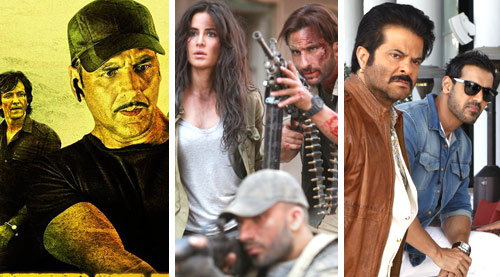 Now these are going to be exciting months ahead for Bollywood as 2015 is already looking bigger, what with crores of rupees at stake with Baby, Phantom, Welcome Back, Bajrangi Bhaijaan, Dil Dhadakne Do and more. None of these has claimed to be an epical affair though. They are - what one terms as - plain and simple big budget films which are meant to be promising mega Bollywood offering.


And then there are certain films that would have phrases like 'dream project', 'ambitious outing', 'journey of a lifetime' and above all, 'an epical saga in the offering', attached to them. While it is given that most of these would carry a budget in the North of 100 crore, a lot more than money is at stake here. It is a matter of pride, reputation, standing and stature which is at stake, something which is much more than just what money can buy.


When we asked a few filmmakers and trade folks about the risks involved and the eventual prospects of these biggies, this is what they had to say:


Vikram Bhatt - One thing which is sure is that all these films will open very well and would hold on well, unless they are really bad. These are all 'big star' films and since 100 crore is no big deal today, they would comfortably surpass that mark. Let me state an example. Singham Returns released this year and got more than Rs.110 crores in its first week. Then it folded up around Rs.140 crores eventually. For a film which opens so well, it is not expected to buckle down. Still, the fact remains that the first week was so huge that Reliance made its money and the film was profitable. That's the whole point.


Anil Sharma - They all are sensible filmmakers and when films are made sensibly, the risk factor is very less. Business of films is increasing day by day, so my best wishes to all these films. I feel they all are going to do great.


Kunal Kohli - Filmmaking is all about capturing the vision of the director. I'd rather discuss their passion behind making films than budgets. There's no risk in a director pursuing his dream, his vision, his thoughts.


Ali Abbas Zafar - I think the industry is going through its best time in terms of box office collections and it's a healthy sign for directors with larger than life vision to use the heavy budgets to showcase Indian audience international standard of filmmaking. The future looks bright and promising.


Dia Mirza - The intention with these films is to create larger than life experiences, with a canvas that attracts audiences into a theatre experience. All these films are being made with MEGA stars to justify the cost and increase propensity to earn. Are the budgets justified? We won't know until these films are made and released. Yes, what is certain is that these budgets can be very tough to recover. But film is a business of risk and everyone involved knows that. Of course, it will always be eventually the mood of the audience and the impact of the film that will drive business.


Atul Mohan - We are attempting something which we never did. We will be catering to changing taste of audience. Big budgeted films have been made in West for long. Earlier it was not possible here due to not so wider release as in Hollywood. But now by the time these films are ready to hit the marquee, we will have more multiplexes, and year and half down the road, the prices of cine-plexes will also increase. So recovery of these big budgeted films will not be difficult. The prospects are definitely looking bright.


Sanjay Gupta - Big budgets don't make highly successful films. If you look at history, the opposite is true. Giant budgets come with giant expectations and require gigantic collections just to break even.