In the upcoming episode, the tables are taking a major turn as Non-VIP members- Rajiv Adatia, Jay Bhanushali, Neha Bhasin, Simba Nagpal and Pratik Sehajpal get a chance to snatch a seat from one of the VIP members. 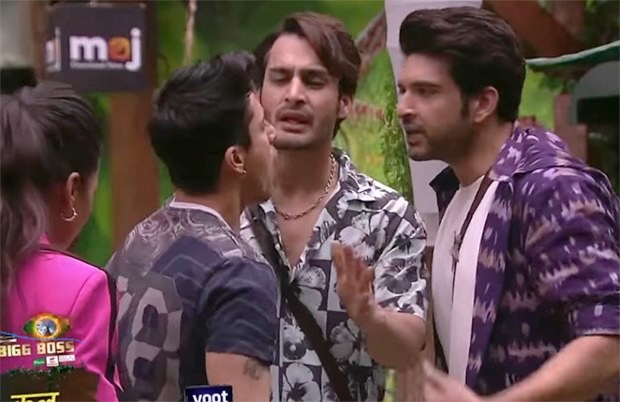 There has been a certain amount of gloat on VIP members' faces since the time they have had access to the room full of pastries, chips, and privacy (Which is difficult to get in the BB house).

It was obvious that Bigg Boss wouldn't let VIP members enjoy their stay like a vacation in the house and that is why the tasks turned out to be a major spin in the VIP's fate.

As the task begins, a major fight takes place between Prateek and Kundra. This wasn't a regular tiff between the two bros but a fight that could have easily turned physical if not for Tejasswi holding Karan Kundra from behind, saving him from the repercussions of Bigg Boss.

Karan Kundrra says that he will make sure that the task gets dismissed and nobody gets to gain a VIP seat. Fans wonder if this was Kundrra’s insecurity speaking for him or was it Karan’s ego.

Who do you think will win the VIP seats among the non-VIPs of the house? The VIPs and non-VIPs are equally desperate to save and snatch the seat to the finale respectively.

Also Read: Bigg Boss 15: Jail introduced in the season for the first time; VIPs fight among themselves to decide who should be punished