Bigg Boss 13 is getting hotter and spicier day-by-day. This celebrity special express season has got us our first love triangle already and the latest clip of Unseen Undekha is proof! In recent episodes, we have already witnessed budding chemistry between Paras Chhabra and Shehnaaz Gill. But seems like, Siddhartha Dey has a teeny weeny crush on Shehnaaz too and Paras isn’t too comfortable with it. 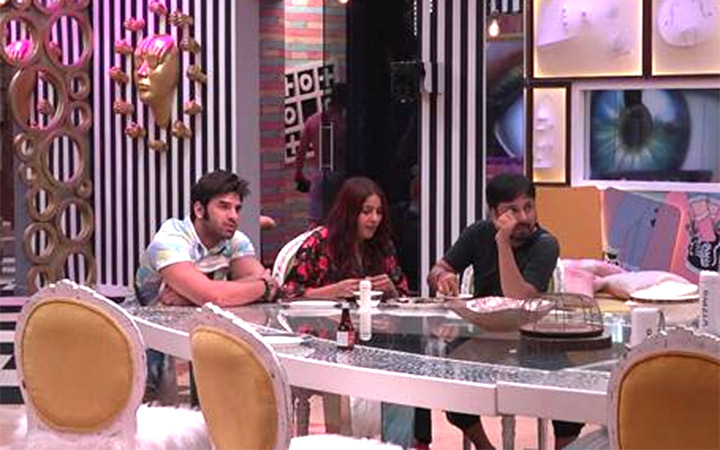 When Shehnaaz sits on the dining table sharing her plate with Siddhartha, Paras jumps in and asks her, “You want salt baby? Baby do you want bhindi?” On the other hand, Siddhartha who is already feeding Shehnaaz chooses to ignore this. An insecure Paras expresses his anger and says, “Yahaan ghar main hi aise apne pade hai, toh bahaar walon se kya umeed rakhein.”

Further Siddharth continues to feed Shehnaaz when she says “hmm. Nahi khaao aap.” Paras grabs the opportunity and jumps in to ask Shehnaaz, “You want acchar?” Shehnaaz nods and further asks her, “You want pappi?” to which the pataka kudi Shehnaaz blushes and says, “Noo!” making Siddharth uncomfortable.

Now, isn’t the chocolate boy Paras trying too hard to win Shehnaaz Gill while Siddhartha isn’t backing his foot either? We must say, tough choice, Shehnaaz!

Also Read: Bigg Boss 13 Weekend Ka Vaar: Salman Khan loses his cool on the contestants, asks them to ‘get out of my house’