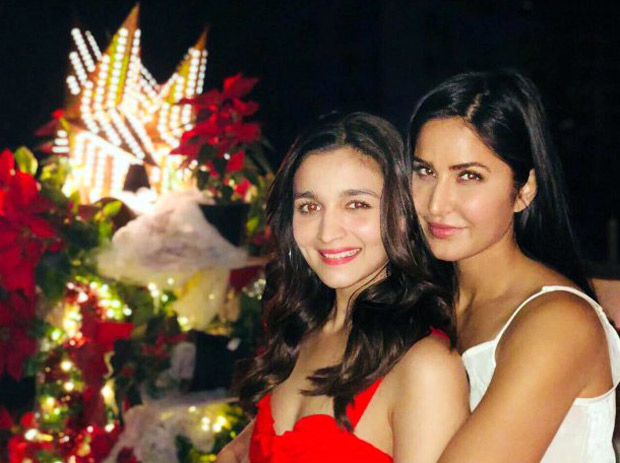 Alia Bhatt and Katrina Kaif have expressed fondness for each other ever since they took off for the performance tour – Dream Team together. And their friendship became the cynosure of eyes after the duo made several appearances together of late. From Vogue BFFs to their selfies at the recently held Ambani bash, talks about their close bond spread like wildfire and now adding to fuel to it are the Christmas celebrations.

With many celebrities taking time out to spend time with family and friends this holiday season, Alia Bhatt and Katrina Kaif decided to celebrate Christmas together. Alia Bhatt recently took to Instagram to give us a glimpse of it wherein she shared this picture with Kaif saying, “merry with katy.” In fact, the B-town besties even themed their outfits as per the festive season as Alia was seen in a pretty red dress and Katrina chose white for the evening.

On the work front, Katrina Kaif and Alia Bhatt have a great year to look forward to. After the stupendous success of Tiger Zinda Hai this year, Katrina will feature in two more Khan films next year which includes Aanand L. Rai – Shah Rukh Khan’s untitled film and Aamir Khan, Amitabh Bachchan starrer Thugs of Hindostan.

As for Alia Bhatt, her next release Raazi will hit the silver screen in May 2018 and will feature her as a Kashmiri spy. Besides that she will star in Ranbir Kapoor starrer superhero drama Brahmastra and Ranveer Singh starrer Gully Boy.