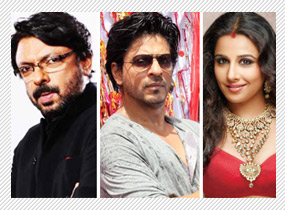 Barely has dust settled down on eventual cast of Sooraj Barjatya's Prem Ratan Dhan Payo (thank goodness!) that speculations have seen a rise for at least give other major films. Call it a smartly designed PR and Marketing campaign or genuine lack of clarity around the eventual leads, the fact remains that practically every day one experiences a new name being thrown around.

At the top of the list is Sanjay Leela Bhansali's Bajirao Mastani. It is one of those rare films where various stars have been considered for over a decade! Bhansali went on to make many films in the interim period and now that he has made up his mind for this, names like Ranveer Singh, Ajay Devgn, Shah Rukh Khan, Deepika Padukone, Kareena Kapoor and Priyanka Chopra have popped up.

Current status: No official announcement for any actor yet

After a brief period of speculation around the leading lady (at one point in time even Vidya Balan was presumably considered), the film was all set to start with Hrithik Roshan and Kareena Kapoor. This was before trouble ensued with Kareena getting tired of the waiting period and Hrithik opting out due to health issues. Yet again, the usual suspects for gaining an entry here are Ranveer Singh and Deepika Padukone.

Current status: No official announcement for any actor yet

Announced with Shah Rukh Khan and Farhan Akhtar in lead roles, Raees inarguably turned out to be one of the best cast films. However with Farhan choosing to opt out due to his busy schedule, Nawazuddin Siddiqui's name has recently popped up. Meanwhile for the part of a leading lady, Sonam Kapoor and Katrina Kaif's names have been heard quite a few times, though no one has gone on record as yet.

Current status: An official announcement has been only for Shah Rukh Khan

For close to half a decade now, No Entry Mein Entry has been in news. Though Salman Khan has verbally confirmed doing the film, one waits to see the day when the film actually goes on floors. As per director Anees Bazmee, Anil Kapoor and Fardeen Khan would return for this sequel to No Entry, though a formal word is awaited. As for the leading ladies, so far rumors convey that Bipasha Basu would return too.

Current status: No official announcement yet around the final cast

All seemed well till a fortnight ago and it was just picture perfect for Emraan Hashmi and Vidya Balan to pair up again (after The Dirty Picture, Ghanchakkar) once Mohit Suri is through shooting his Villain. However with rumors of Vidya's pregnancy popping up, even Bhatt brothers were left puzzled. While Kangna Ranaut's name started making the rounds soon after, apparently Vidya is staying in the film.

Current status: For now, Vidya Balan stays on to be film's lead along with Emraan Hashmi