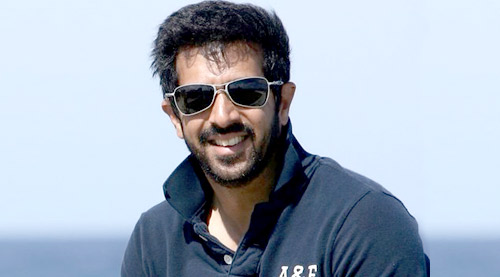 The unexpected scale of success for S. S. Rajamouli's Bahubali has not daunted Kabir Khan whose Bajrangi Bhaijaan (BB) releases a week after Bahubali.

Says Kabir, "I am absolutely thrilled by the response to Bahubali. What the director Rajamouli has achieved in Bahubali is absolutely unprecedented. With due respects to the film's lead actors Prabhas and Rana Daggubatti are not superstars in the North. Bahubali has worked for its concept execution and screenplay."

Kabir Khan has much reason for pride in Bahubali's success. "As you are aware, my film is written by K Vijayendra Prasadji who has also written Bahubali. The writing and the direction are clearly the stars of the show. I am hoping Vijayendraji's magic will work in our film too."

Isn't Kabir apprehensive about the mega-success of Bahubali eating into the BB ticket sales? "Not at all! We are talking that way only because of the scarcity of screens in India. We've only 4,000 screens while China has 12,000. There will always be a tussle for a large number of screens between two big films."

Kabir Khan nonetheless feels there is room for both the films to co-exist in theatres next Friday. "Bahubali and Bajrangi Bhaijaan are very different, yet tied together for being content-driven. Unfortunately Bollywood cinema continues to be star-driven. If a Hindi film has to score big it has to feature an A-lister actor. With Bahubali Indian cinema has moved out of that mindset."

Says Taran Adarsh, "I don't think Bahubali will affect Bajrangi Bhaijaan for the simple reason that Salman Khan's popularity is at an all-time high. He is a huge star. Both films will co-exist."

Explaining the unparalleled popularity of Bahubali, Taran says, "The content is fantastic. Plus, the hype and buzz were super-strong. Also, let's not forget the director S S Rajamouli's track record is unbeatable. Most importantly the reviews and word-of-mouth have taken Bahubali to another level."

Adds Atul Mohan, "I was very optimistic about Bahubali. Sure enough, it has surpassed all expectations. The word of mouth recommendation is very strong. The collections of the first few days have shattered many records. More records will be broken in the coming days."

Atul does see a potential threat for BB from Bahubali. "The footfalls are increasing in the Hindi belt. It will be interesting to see how many multiplexes and single-screens are going to slot Bajrangi Bhaijaan. If the supremacy of Bahubali continues at the box office, as I feel it would, then the going may get tough for BB down South."

At the same time Atul feels there is room for two big films to co-exist at the box office. "A Salman film is a whole festival by itself. Coming on Eid the festive mood only gets bigger with Bhai's film."