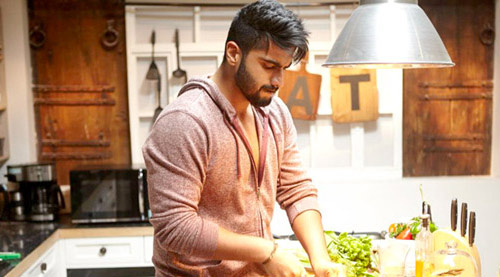 Just 10 days remain for the release of Ki & Ka, and for Arjun Kapoor it is one film which truly brings him into a different zone. Though the word 'different' has been

much used and abused in Bollywood parlance, it indeed is the case in the R. Balki film, considering the role reversal that Arjun and his leading lady Kareena Kapoor Khan enjoy in there.

"To be honest, I really wanted to meet this boy when Balki spoke to me about the character first," says Arjun, who was last seen in an out and out macho Tevar, "Leave aside the fact that I

had an opportunity to act in there, even as an audience member I wanted to know how this boy would actually be in real life. I knew that I had to play this part."

This, when Balki himself was contemplating if he wanted Arjun to be stepping in for Ki & Ka or another film for which he had an idea in place.

"Yes, Balki sir had offered me another idea but I was a little 50:50 on it. However when it came to Ki & Ka, I just jumped on to it. As a matter of fact I convinced him that he had to just

go ahead and make this one," he continues.

So charged was Arjun about enacting the part of Kabir that he gave a go ahead just on the basis of idea, without waiting for Balki to revert with the final script.

"I am an actor who actually waits for the final draft before making up my mind and committing to a film. However in case of Ki & Ka, I found a perfect idea in there. Just imagine, when you

have a perfect idea with the kind of sensibility that Balki sir carries, there was no reason I would have thought much before making a decision. I was game for it," asserts Arjun.

When it came to approaching the part though, Arjun was sure that he would have to step away from the stereotypes.

"Yes, Balki sir and I discussed possibilities around the directions in which we could have taken Ki & Ka," says Arjun, "See, first and foremost we didn't want to portray that this boy is

hai. We wanted to establish that this guy is well educated, can work outside if he needs be but then it is a choice he has made to take care of things at home."

Rest was taken care by the narrative style of Balki, which ensured that there was fun treatment right through the narrative.

"He has achieved so much in the world of ads. With Ki & Ka, he too wanted to make a fun, light and frothy film. Guess we have achieved that," says Arjun before signing off.