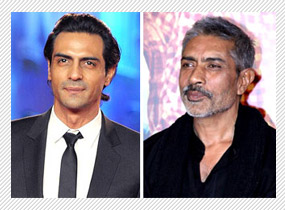 It is a known fact that while his films are entertaining, Prakash Jha keeps everything as close to reality as it can be. Arjun Rampal experienced that first hand with Raajneeti two years ago and things weren't any different in case of Chakravyuh either. This means even before landing on location for the film's shoot, he had to be a part of simulation that required braving the heat, getting accustomed to a cop's uniform, interaction with cops and also getting his diction right to suit the film's setting.

"Prakash Jha does encourage a lot of readings and discussions before starting his films and everyone associated with the film was well aware of that from the very beginning. Whether it is Arjun or Manoj Bajpayee, who has worked extensively with the director, they knew what was in the offering. However Chakravyuh took them all to the next level and it turned out to be physically exhausting as well", informs a source.

Since the temperature shoots up as high as 55 degrees in Madhya Pradesh (where the film was shot), Arjun and other actors were advised to get used to that. They were also made to wear their respective uniforms for an extended period of time so that not just they accustomed themselves to the characterisation, they also realised how to carry it to perfection.

"Meanwhile Arjun, who is playing the role of a cop, did his own preparations by observing cops and taking mental notes of his many interactions with them. Since he isn't playing a filmy cop, Arjun had to be doubly sure of getting it right for Jha who demands nothing but perfection from his actors", the source continues.

Moreover each of the actors also had to go through an extensive training in order to get the diction right since the spoken Hindi had to be different due to the film's regional setting. Also, he showed quite a few images of Naxals and their surroundings to his actors.

"Well, that's Prakash Jha for you. He keeps things so real and believable that after a while it becomes tough to distinguish the two", smiles Arjun, "Guess that's the fun part of it because as an actor you can change from film to film. For me, getting into such a real and believable part was a definite high."