In his prolific film career spanning over three decades, Anupam Kher has portrayed several interesting and memorable roles in successful films, including Bollywood and Hollywood. Not only that, the actor has made some really good friends in Hollywood. He always makes sure to support them. Just recently, the veteran actor watched a play Straight White Men and reunited with his Hotel Mumbai co-star Armie Hammer. And he introduced newlyweds Sonam Kapoor - Anand Ahuja to the Hollywood actor and his family. 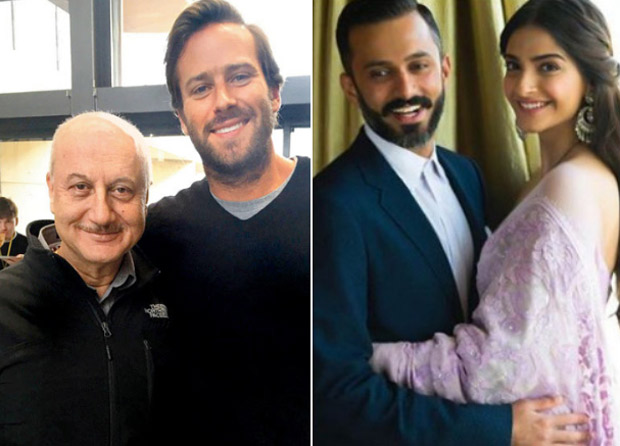 Just recently, after launching Anand Ahuja's Mumbai store of sneakers, Sonam Kapoor and her hubby flew to New York. Anupam Kher, who is currently in NYC to shoot for his show New Amsterdam, got a hint that the couple was in NYC and grabbed lunch with them. Anupam Kher has been friends with Kapoor family for the longest time. His close friendship with Anil Kapoor is known to all. The couple joined the veteran actor for lunch this past weekend to catch up. He even invited Armie Hammer, his wife Elizabeth Chambers for lunch. They came along with their toddlers as Sonam and Anand got to spend time with the Hollywood actor and his family. We came across a couple of videos in which Armie, Anand and Armie’s kid celebrated their birthdays together.

On the work front, Sonam Kapoor was last seen in Veere Di Wedding. The actress has two films - The Zoya Factor and Ek Ladki Ko Dekha Toh Aisa Laga- both of which will release in 2019.

On the work front, Anupam Kher is in New York to shoot for NBC’s new medical drama, New Amsterdam. The talented actor will be seen portraying yet another challenging role of Neurologist Dr. Vijay Kapoor in the series. The character-driven medical drama is about a director at the Bellevue hospital, who shakes the status quo of the hospital with his approach.