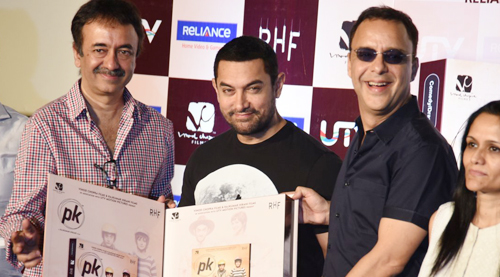 At the DVD launch of PK in Mumbai today, Aamir Khan apologized to those people who were unintentionally hurt by certain aspects of PK. But he also stated that he's not apologetic about the film and stands by it totally. Aamir also said that he favours freedom of speech and he doesn't approve of the violent means by which certain groups protested against PK after its release.

The PK Blu Ray, DVD and VCD carries the making of the film and four deleted scenes as well. At least one deleted scene where Aamir searches for God in a 'dancing car' is especially interesting, funny and yet poignant. Rajkumar Hirani said that it was his favourite scene but unfortunately they had to chop it off. The BLU Ray, DVD and VCD will be available in the market from March 16 onwards.

Aamir who's celebrating his 50th birthday on March 14 said that he feels like an 18 year old. He said that he doesn't think he has reached the peak of his career yet because according to him, if you say you've reached the peak then you go downwards hence forth. He's not aware of the plans for his birthday and he stated that his wife Kiran is planning it. He shall be meeting the members of the media, a day earlier on March 13. He shall leave for the resort near Lonavla on March 13 afternoon.

For the first time Aamir Khan spoke about his next film Dangal. He said he has put on around 22 Kgs and is currently weighing 90 kgs. He has started learning Haryanvi and also the craft of wrestling. The casting for the film is still on and most probably the shooting should start in a few months.

Rajkumar Hirani, post the launch of PK DVD, informally told me that he had been prepping for the Sanjay Dutt biopic in United Kingdom. He refuted the news story that appeared in certain sections of the media that he was writing the film in USA. He looked fresh-n-relaxed which was quite a contrast to the days when he was giving final touches to PK before the release.