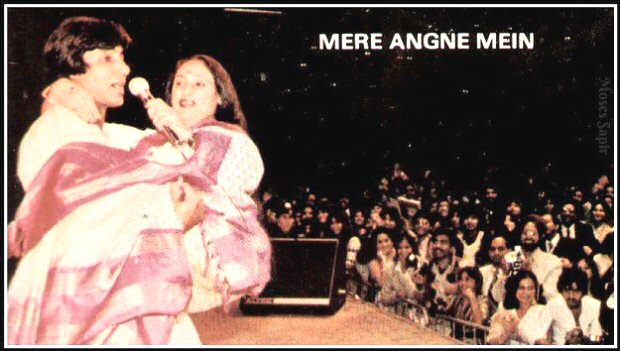 One of the most beloved pair of Bollywood is that of Amitabh Bachchan and Jaya Bachchan. It was a fairy tale love story as both met on numerous film sets and fell in love. The marriage took place in 1973 and though they hit a rough patch after a few years, they ensured that they didn’t quit. Both worked on their marriage and after almost 44 years, they are going steady.

Today, Amitabh Bachchan posted a wonderful vintage picture that’s sure to make his and Jaya Bachchan fans smile. It’s from a concert held in some city in USA way back in 1983. Both Amitabh Bachchan and Jaya Bachchan were a part of it. In the picture, Big B is seen lifting Jaya in his arms. Jaya is sweetly holding the microphone for Amitabh, who in turn, is singing something for him. The text on the picture says ‘Mere Angne Mein’ and we presume that he must be crooning that song from the 1981 film Laawaris. The caption of the picture is “Jiski biwi choti uska bhi bada naam hai”, which sums them up perfectly since Amitabh Bachchan is unusually tall while Jaya is short heighted and it is also a song!