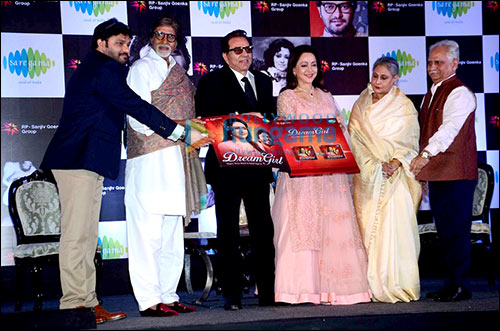 Whenever someone utters the term 'Dreamgirl', the one (and probably the only name) that pops up in or minds is that of the yesteryear's stunning actress Hema Malini. After having regaled the audiences with his flawless acting prowess, yesterday, she demonstrated yet another facet of her diverse talent... and that's her singing skills.


After being inspired by the legendary Kishore Kumar to sing, Hema Malini's long cherished dream of releasing her very own album of songs finally came true yesterday. Aptly titled 'Dream Girl', the album launch saw the 'coming together' of the lead stars of the cult film Sholay, in the form of Dharmendra, Amitabh Bachchan, Jaya Bachchan and Hema Malini herself!

During the event, Dharmendra, Amitabh Bachchan, Jaya Bachchan showered words of praises on Hema Malini for all her achievements in her life. Hema Malini, on the other hand, said that she did not do much riyaaz for her singing and that it was Babul Supriyo and his guidance on the nuances of singing that it was possible for her to cut her singing album.


When asked, Hema Malini said that she hopes to come out with more such work in the future.