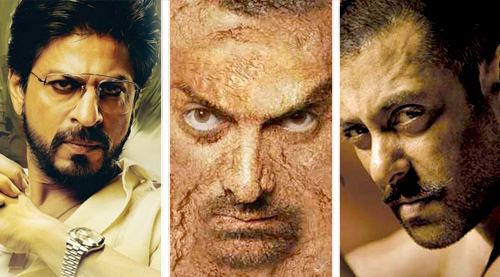 The triumvirate of Khan superstars are back together again this year. Last year Aamir Khan was missing from the theatres, his last release was the record-breaking PK in Christmas 2014. In 2016 Aamir has Dangal coming up for release where he plays a real-life wrestler from Haryana. However stealing Aamir's thunder from his own backyard is his erstwhile (?) friend Salman Khan who plays a Haryanvi wrestler in Sultan.

Salman's Sultan which opens two months before Dangal, is bound to take away some of the wind from Aamir's sail.

A trade analyst who doesn't want to be named says, "Salman and Aamir have their own individual fan base, no doubt. But if they are both playing Haryanvi wrestlers during the same year there are bound to be comparisons. And if Salman's film releases first he will have an edge over Aamir unless the two films are completely different in treatment. Even then, they are both films about wrestlers at the end of the day."

Joining Salman Khan this Eid is Shah Rukh Khan with Rahul Dholakia's Raees. One hears that Shah Rukh may move to another Friday, away from Salman's territory to avert another clash in 2016 after the Dilwale - Bajirao Mastani one in 2015.

But before Raees, Shah Rukh Khan has Maneesh Sharma's Fan on 15 April. Hence among the Khan triumvirate Shah Rukh has a quantitative advantage. And since Shah Rukh plays a double role in Fan its 3 SRKs in 2016 against one each of Aamir and Sultan.

May the best Khan win.