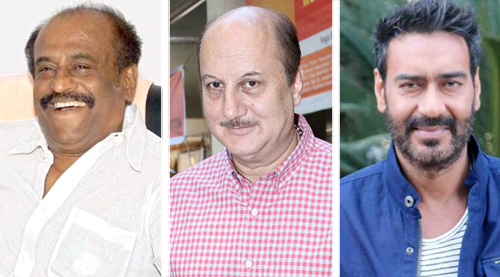 The Government in, all its wisdom, decided to honour Saeed Jaffry with a Padma Shri months after he passed away. It's not ours to ask why this couldn't have been done while the actor was aliveâ€¦technically. For, Bollywood had killed him off a decade ago.


The National honours this year given to entertainers from Indian cinema displays a wide arc of eligibility, from the hard achievers (like Rajinikanth and Anupam Kher) to the hardly achievers .


Rajinikanth considered God in Tamil cinema gets the second-highest civilian honour the Padma Vibushan. There are rumbles from his fans that he deserves the Bharat Ratna, nothing else. But the fans should look at it this way: the Gods need no recommendation from human institutions.


Anupam Kher's Padma Bhushan has also raised a coterie of eyebrows. Anupam, they snigger, has been shouting anti-antiprotest slogans so hard that reached the ears of the power-that-be. Before that Anupam tweeted anti-awards messages which have been duly ignored by Kirron Kher's colleagues.


Ajay Devgn who once played Bhagat Singh and has since then patented the role of the desi super-cop Singham, gets a Padma Shri while Priyanka Chopra who has lately gone global (but then so has Priya Mallik, the Bigg Boss contestant from Australia) also gets a Padma Shri. I sadly missed Kapil Sharma in the Padma Shri list for patenting misogyny on his show as an acceptable form of satire.


Others from the movie industry to get Padma Shris are filmmakers Madhur Bhandarkar (for the record, his last film was Calendar Girls) and Nila Madhab Panda (who had made a commendable film I Am Kalam inspired by our former President).


Not quite the kind of achievers who deserve national honours in the Padma Shri list except S S Rajamouli of Baahubali fame. Long before he captured the nation's mind with his epic spectacle Rajamouli made game-changing entertainers in Tamil. So, well done.


Talent, will tell. Though what some of the talent honoured by this year's Padma, tells, is another story.