Alia Bhatt has been dating Ranbir Kapoor for a while now. The actress went public with her relationship on Instagram after Sonam Kapoor's wedding last year. Though they have refrained from talking about their relationship, they continue to make appearances together They recently returned from their 10-day vacation from New York where Alia spent time with Kapoor family. 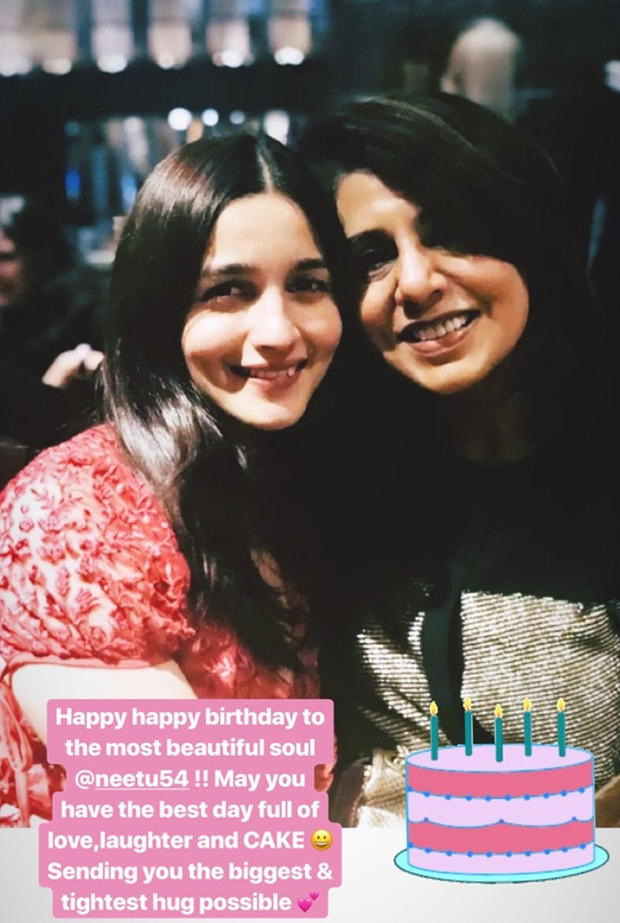 Now, on the occasion of Neetu Kapoor's birthday, Alia Bhatt shared a heartwarming post for her. Sharing a lovely photo with her on Instagram story, she captioned it, "Happy happy birthday to the most beautiful soul @neetu54!! May you have the best day full of love, laughter and CAKE. Sending you the biggest and tightest hug possible.”

Alia Bhatt has spent a lot of time with the Kapoor family ever since she began dating Ranbir Kapoor. The actress was in New York during New Year's Eve as well. She has become close to all of them and the Kapoor family always shares photos with her.

Meanwhile, on the work front, Alia Bhatt has many projects in the pipeline. The actress will be next seen in Brahmastra which is set for Summer 2020. She also is starring in Arunima Sinha biopic, Takht and Telugu movie RRR.

ALSO READ: “You’ll just see a very personal side to me on YouTube” says Alia Bhatt about her YouTube channel