Alia Bhatt recently celebrated 9 years to the release of Student of the Year on 19th October with mentor and director Karan Johar and co-stars Varun Dhawan and Siddharth Malhotra who joined them virtually! Alia Bhatt has evolved as an actress over the years and ever since her debut in the Karan Johar directorial. She has proved her worth as a performer with her versatility and strong performances. 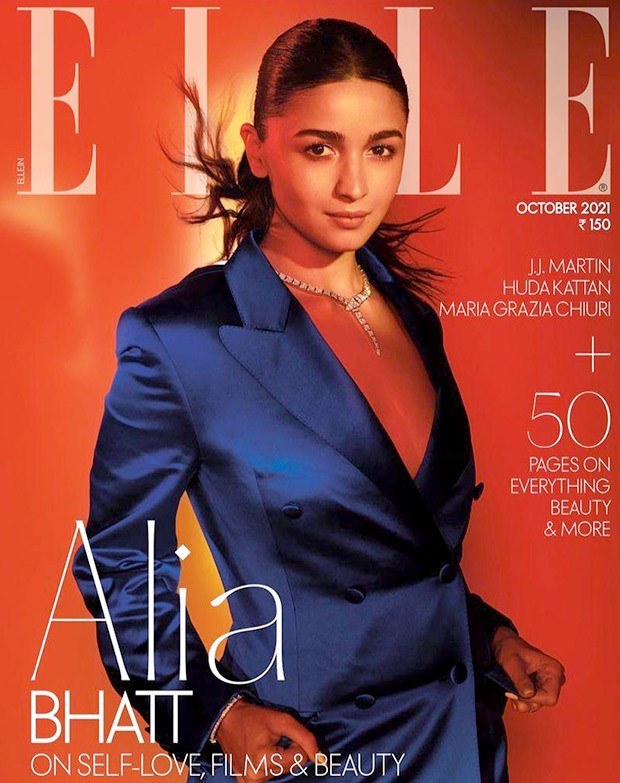 Alia Bhatt is the cover girl for Elle India for the month of October. She dons the look of a go getter, boss lady and gets her power dressing right! She pulls off the formal look with a blue suit. She wears a royal blue double breasted blazer sans shirt with a Victorian collar that fits her just perfectly. Her makeup is simple with a soft shimmer and her hair in a neat centre parted low ponytail. She perfectly styles the blazer from Gucci.

For another look, she doned an oragnza Ralph Lauren dress with pleats and a rhinestone studded mesh top from H&M. Her makeup is dewy with a centre parted low bun! And she adds the much-needed bling with chunky rings, bracelets and black stone earrings.

For the last look, she keeps it chic in a tight fitted, rhinestone studded corset with a black asymmetrical hem line full sleeved knit with flared pants, all from Gucci. She keeps her accessories simple with soft makeup and neatly tied hair!

On the work front, Alia Bhatt will next be seen in the film Gangubai Kathiawadi and RRR. Both the films will be released in theatres in the first week of January. She also has Brahmastra, Darlings, and Rocky Aur Rani Ki Prem Kahaani in the pipeline.

Also Read: Mouni Roy is too hot to handle in halter-neck silk scarf top worth Rs. 14,000; pairs it with leather pants and thigh-high boots