Actress Alia Bhatt is gearing up for the release of the much-anticipated SS Rajamouli film RRR starring Ram Charan, NTR Jr and Ajay Devgn. The film is slated for a theatrical release on 7th January 2022 and its promotions are going on in full swing. 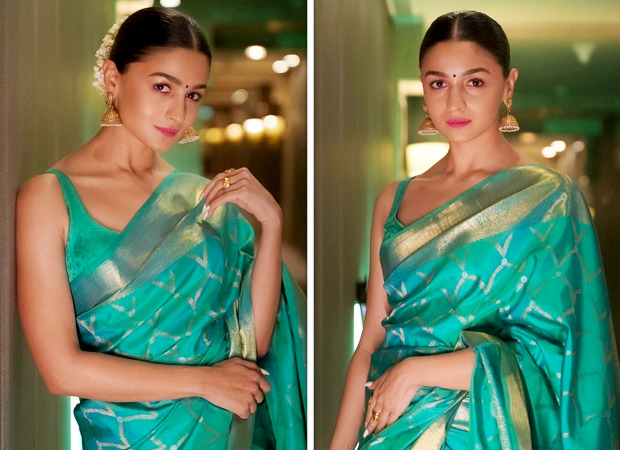 Recently, a promotional event was organised in Chennai where the entire star cast of the film was present. For the event, Alia Bhatt donned a sea-green Kanjeevaram saree and it wouldn't be wrong to say that she totally slew it. The saree features gold embroidery all over the pallu and the drape. The star teamed up her elegant ensemble with a matching sleeveless blouse in the same green hue.

Further, the actress accessorised the six yards with a statement gold earring featuring white pearls and two statement rings. While what stole the show was her gajra. The actress has shared the pictures from the event on her official Instagram handle and captioned it with a peacock emoticon.

Apart from RRR, Alia Bhatt also has Sanjay Leela Bhansali's Gangubai Kathiwadi for release. The film is slated for a theatrical release on 18 February 2022.