Author Twinkle Khanna and actor Akshay Kumar recently took up questions from the 'most fearsome interviewers'- little children. They answered questions posed by the curious kids with honesty and a little wit. 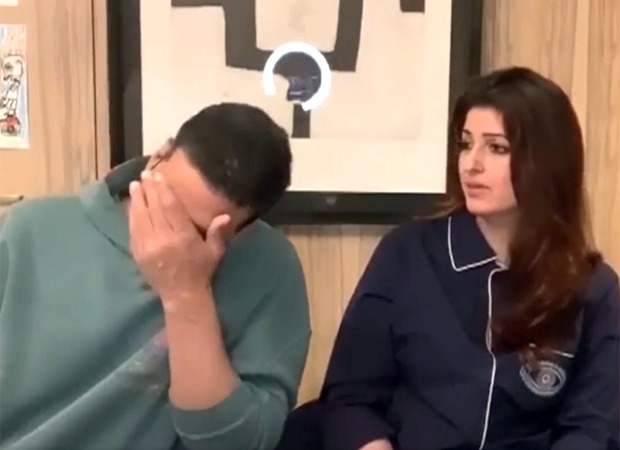 Sharing the video of the question and answer session, Akshay Kumar wrote, "Facing the most fearsome interviewers... @tweakindia put me and @twinklerkhanna in the hotseat and we had to spill our secrets, right from who’s our favourite superhero to the best chef in our household. Loved learning about the real-life heroes in the new children’s book from Tweak Books, When I Grow Up, I Want To Be. And maybe Tina can finally shed her hopeless chef title by trying the recipes from this amazing cookbook, What’s In Your Dabba?”

The first question was from a child who termed healthy food as 'yucky' and said she loves burgers. Responding to her, Akshay said. "You have to eat yucky food. Yucky, which is very healthy. You have to keep yourself fit.” Reacting to Akshay's response Twinkle revealed that Akshay makes chocolate paratha for his kids. She asks if it is 'yucky' or 'healthy' ?

Akshay clarified that he only makes chocolate parathas sometimes. “Sometimes, they want to enjoy themselves. Sometimes, on some rare Sunday, I try making that,” he said.

Facing the most fearsome interviewers... @tweakindia put me and @twinklerkhanna in the hotseat and we had to spill our secrets, right from who's our favourite superhero to the best chef in our household. Loved learning about the real-life heroes in the new children's book from Tweak Books, When I Grow Up, I Want To Be. And maybe Tina can finally shed her hopeless chef title by trying the recipes from this amazing cookbook, What's In Your Dabba?

The second question was who is the best chef? Akshay was quick to respond on this one. “I don’t think you even have to say it. It’s me. She can’t even make an omelette.”

Twinkle said that it was their son Aarav who was the best cook in the house and Akshay agreed. "He (Akshay) is a very good cook. He knows how to fry my brains, boil my blood. If you really want to know the best chef in our family, it’s our son. He can make anything, from rajma to pizzas to the most amazing dessert,” she said. Praising his son, Akshay said, "He is the best cook, I am the second best and she (Twinkle) can only cook stories.”

Akshay Kumar also spoke about his favourite superhero- Tarzan. “Because he is strong, powerful and he uses his own strength,” he said. Twinkle humorously said that he likes Tarzan because he likes “bare-chested men and Bear Grylls”.

Twinkle also revealed how she would scare Aarav into eating his food. “I used to tell my son when he was little that if he was not eating his food, the mutton lady would come and she would cut his fingers up, fry them and sell it at Juhu market. Now, this is a horrific story. He didn’t

really eat French fries for a very long time because he thought that French fries were made by the mutton lady. But it did the trick and he did eat his food,” she said.

Akshay did not agree with this method and said, “Never ever train your children like this. I know that somewhere, my son got a little scarred by all this. Thank God my daughter is too intelligent and she is amazing. Am I right Nitara? You don’t get bullied by your mother saying all this mutton lady and ghosts, right?” The eight-year-old replied in the affirmative to both questions asked to her.

When one of the kids asked Akshay Kumar if his parents encouraged him to do stunts, he said , "My parents did encourage me but they used to always tell me to be very careful. The most important thing about stunts is coming out unharmed. I never believe a stunt is a good stunt if the person gets any kind of scratch or gets hurt. Whatever you see me or anybody doing, it has all been supervised properly and done. Parents, do encourage your children to do stunts. Stunts are amazing. You never know, he could be one of the best stuntmen."

“Partners, allow your spouses to do stunts but just make sure that they have an insurance policy and you are the beneficiary. At least, that is my policy,” Twinkle added.