Last Updated 27.11.2021 | 2:12 PM IST
feedback language
follow us on
Bollywood Hungama » News » Bollywood Features News » Akshay Kumar reveals Kapil Sharma has a bigger house than him after the comedian says he took away his ad

Akshay Kumar will soon be seen in the film Laxmii which will be released on Diwali. The actor along with co-star Kiara Advani is currently promoting the film and they recently shot an episode on the Kapil Sharma Show. 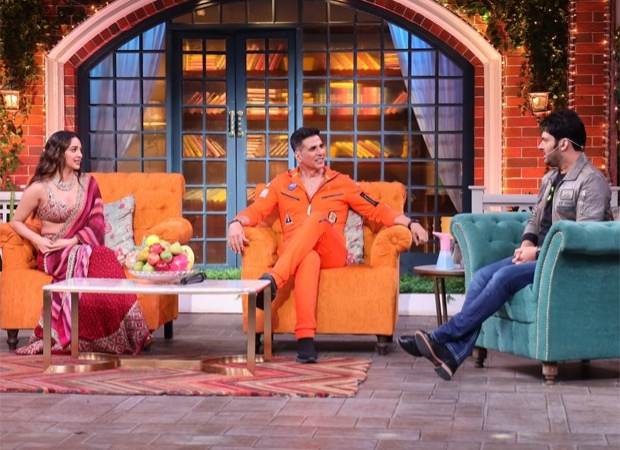 The show will be aired on Television in the upcoming weekend. Recently, the channel shared a hilarious promo from the episode. In the promo, Kapil compliments Kiara saying that she is looking adorable to which Akshay says that the lighting of the sets is such that everyone will look adorable.

While Akshay Kumar is known to have multiple releases a year, Laxmii will be his first release of the year owing to the pandemic. Talking about the same, Kapil asked Akshay whether his date diary went for a toss due to the lockdown. “Khud 365 din kamaye, lekin mera calendar chhota kar de (He himself works 365 days a year but wants me to work less)!,” Akshay responds.

A post shared by Sony Entertainment Television (@sonytvofficial) on Oct 27, 2020 at 3:30am PDT

Kapil then tells Kiara that he was jealous seeing Akshay in a particular advertisement of a product of which he was initially the brand ambassador. Akshay then says that Kapil earns a lot and has a bigger house than him. “Jitna yeh aadmi idhar show mein loot ta hai na, koi nahi loot ta. Ek din main iske ghar gaya tha. Itna bada ghar toh mera nahi hai (The amount this man earns from this show, no one does. I went to his house one day. Even my house is not so big),” he laughs.