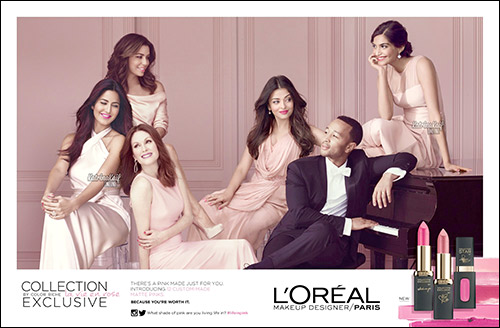 A while back we saw television commercials for the leading cosmetic major L'Oreal that featured all three of their Indian brand ambassadors Aishwarya Rai Bachchan, Sonam Kapoor and Katrina Kaif. While that commercial was for a hair product, the three femme fatales of Bollywood will next be seen in another advert for the brand, but this time for its new lip colour.


The said commercial that also features Hollywood actresses Julianne Moore and Eva Longoria is an introductory advert for L'Oreal's new range of matte pink titled 'La Vie En Rose'. Accompanying the stunning actresses in the advert is also international singer John Legend, who will be doing a song that will feature in the video for the campaign.


Back on the film front, Sonam Kapoor will be seen in the soon to release biopic Neeraj, Aishwarya will be featuring in the biopic Sarabjit and Karan Johar's Ae Dil Hai Mushkil, while Katrina is gearing up for her next release Fitoor and will later also be seen in Jagga Jasoos.