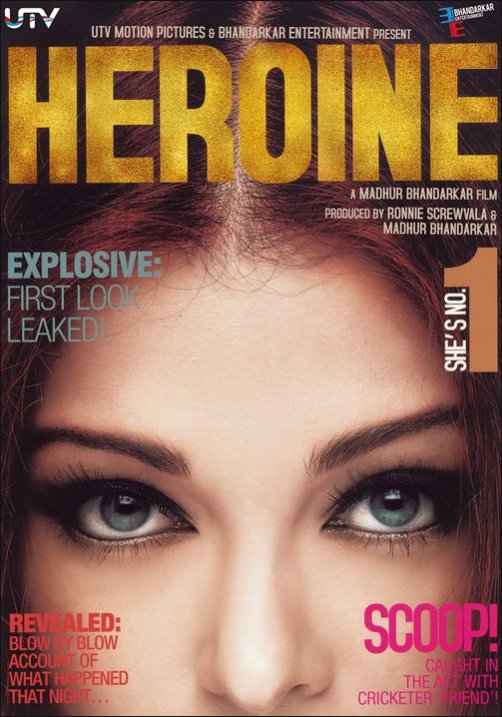 Cannes 2011 saw yet another splash of glamour with Aishwarya Rai Bachchan, Madhur Bhandarkar and Ronnie Screwvala coming together to announce their upcoming movie Heroine. The trio was seen together for the first time to announce their association for the bold and glamorous saga, with the unveiling of the first look of the film at the prestigious film festival.

Directed by Madhur Bhandarkar and produced by UTV Motion Pictures, Heroine will star Aishwarya Rai Bachchan essaying the role of a superstar. The film is scheduled to go on the floors in June this year.

After his incredible run of women-centric films from Chandni Bar, Page 3, Satta and Corporate to the blockbuster Fashion, produced by UTV, Madhur Bhandarkar now turns his lens inward and presents his most ambitious work yet - Heroine. The film is based on the life and times of a superstar heroine from the dream factory we call 'Bollywood'. The film is an entertaining, daring, emotional, shocking, glamorous, scandalous behind the scenes account of the reality behind the world of glitz and glamour that our film stars inhabit. For a country obsessed with films and film stars, Heroine will take audiences on a voyeuristic journey to see what really goes on behind the closed doors of make up rooms and vanity vans. It will give them a chance to go beyond the gorgeous smiles and politically correct quotes, to see what really happens in the lives of India's sweethearts - The sniping & the politics, the secrets & the lies, the incredible highs of fame & the lonely depths of failure. This is the film Bhandarkar has been subconsciously preparing for ever since he joined the industry and one which he considers his magnum opus.

Talking about the film and her association with Madhur and UTV, Aishwarya Rai Bachchan said, "Heroine is a film that the team was very excited about and yes I have just agreed to come on board. Madhur has been speaking to me for many years to collaborate together on a film and I am glad we are finally working together on Heroine. He is the director of multiple award winning films in India and hence, as an actor I'm certainly looking forward to this experience. UTV and I have worked before on special work of cinema; Jodhaa Akbar and Guzaarish, both of which have achieved incredible acclaim, appreciation and awards for us. This new venture certainly looks like a strong creative synergy and I look forward to this new journey in film."

On this occasion, Indian National Award winning director, Madhur Bhandarkar said, "I feel delighted to announce Heroine, my next project, at Cannes - one of the most prestigious global platforms. Unveiling the first look here is certain to be an auspicious start to the movie which goes into production mid this year. Heroine is an extremely glamorous yet bold story of the internal journey of a star, which is sure to appeal to audiences across the globe and therefore Aishwarya was a perfect choice for the film - no one could have essayed the role better. I'm also glad that Bhandarkar Entertainment and UTV are working together again. This is our second film together and we share the same vision which makes the entire process of filmmaking very smooth."

At the unveiling of Heroine at Cannes, Ronnie Screwvala, CEO, UTV said, "UTV and Madhur's combination in Fashion combined the right blend of reality, something that Madhur excels in, with glamour, and it was mounted on a large canvas. With Heroine, we take it to the next level and when you see the movie finally you will know it was written only with someone as talented and expressive and stunning as Aishwarya in mind."