Rishi Kapoor and Neetu Kapoor are receiving a lot of love and affection from many film fraternity members whilst in New York City. The couple has been in NYC for a year now since Rishi was getting treated for his cancer. It was only earlier this month it was revealed that the actor is cancer free now and will soon return to India. Meanwhile, many celebrities have visited them in NYC till now. Adding to the list is none other than superstar Shah Rukh Khan. Earlier this week, many celebrities including Deepika Padukone, Vicky Kaushal and Boman Irani had visited them. 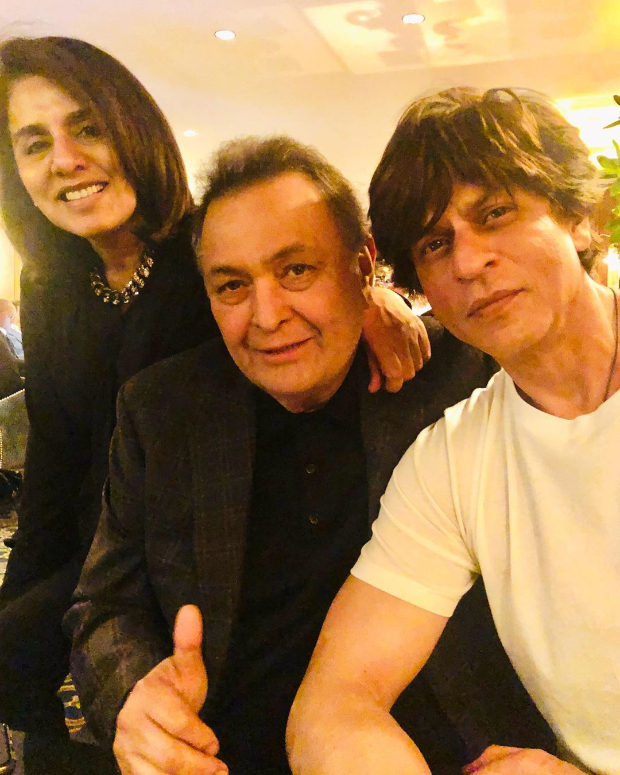 Shah Rukh Khan, earlier this week, flew off to New York to shoot for David Letterman's Netflix show, My Next Guest Needs No Introduction. The actor is set to shoot for the episode later this week. While in NYC, he decided to pay a visit to Rishi Kapoor and Neetu Kapoor. As the Kapoors were delighted to see him, Neetu shared a lovely photo with SRK. The caption read, "To make pple feel good about themselves is a rare quality!!! Shahrukh is all of that his love care is so so genuine !!! besides his amazing work I admire him as a very good and a real human being."

Coming back to Shah Rukh Khan, he is set to film the episode on May 18 in front of the live audience. The host, David Letterman is an American television host, comedian, writer, and producer who has hosted late night television talk show, The Late Show, for 33 years in his career.

The first season of the very successful show My Next Guest Needs No Introduction hosted by David Letterman saw him interviewing the leading names such as Barack Obama, George Clooney, Malala Yousafzai, Tina Fey, Howard Stern and Jerry Seinfeld.