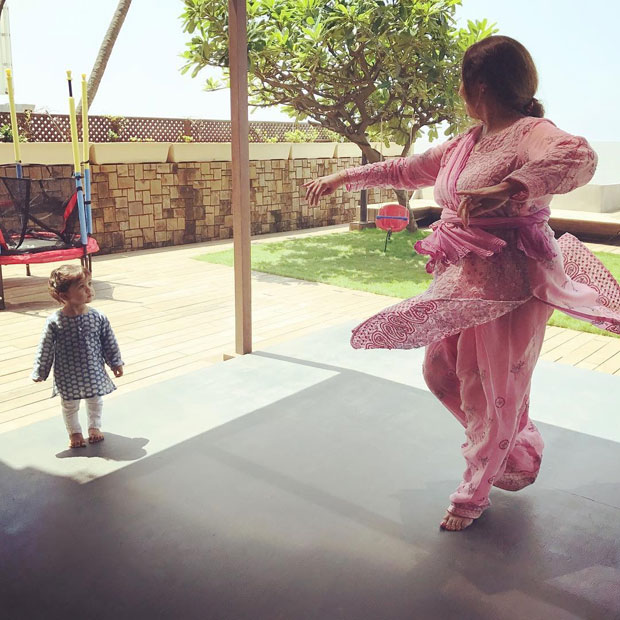 Whether it is Misha or Yash-Roohi or Laksshya or Taimur, star kids have been receiving a lot of attention not only from the media but also own from fans on social media. Their adorable antics often leave social media users in awe of their cuteness and recently yet another one of them captivated the hearts of many.

We all are aware of the cuteness overload Misha Kapoor. While her mother Mira and father Shahid Kapoor try their best to keep her guarded from the hovering paparazzi, they also give sneak peek into the adorable nature of their little angel on social media. Mira, who has taken to loving social media of late, recently shared a picture of her daughter learning dance [well not quite literally] on her Instagram page.

To be more specific, Mira managed to click a perfect picture as Misha was staring intensely at her grandmother Neelima Azeem as the latter danced to the beats of Kathak. Not many know that Neelima Azeem, mother of Shahid Kapoor, is a popular Kathak dancer and she was seen practicing a few moves as she was seen spending time at her son’s home.

On the other hand, a beautifully dressed Misha who was seen sporting churidhar and kurta, looked on to her grandmother in awe, may be indicating her keenness to learn dance. Mira Kapoor also described the moment aptly in her caption calling it “Guru Shishya Parampara”.

It is a known fact that Shahid Kapoor and his family are very close to Neelima Azeem and also her second son Ishaan Khatter. After sharing this picture, Mira also posted several other pictures with Neelima and Ishaan talking about the party night they spent together.