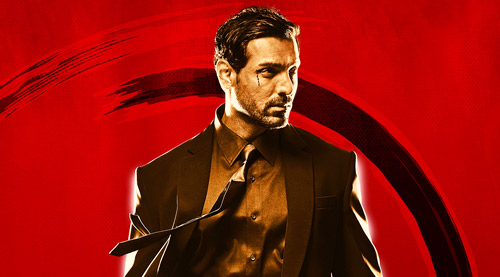 Brutal bone crunching action - This could well be the theme for eight key action sequences (or as John calls them as his 'item numbers') in Rocky Handsome. While a glimpse of that has already been seen in the promos unveiled so far, those who have had a 'dekko' at the film vouch for the fact that there is a lot more that is waiting to be unveiled.


While action is what keeps the narrative going for this Azure Entertainment production of a Nishikant Kamat directed film, at the core of it all Rocky Handsome stays on to be emotional. "That's because action alone cannot drive a film," says John, "What is most important is that within the story, the emotions need to be strong as well. It could be in the form of laughter or tears, but it needs to be there. We had to make sure that the director who comes on board is proficient enough to communicate both these aspects of Rocky Handsome pretty well."


Even though the original Korean film The Man from Nowhere (2010) had the right mix of action and emotion in there, John along with Sunir Kheterpal, who helms Azure, were sure that the latter element had to be accentuated further in the Indian adaptation.


"When we saw the Korean film, we knew that we had to turn it around. This is when we discussed choice of directors and immediately gravitated to Nishi. He is someone who knows action and has a great sense of emotions too for an effective storytelling. We trusted Nishi because he was a complete natural choice for the subject. When you see the film, you would understand that. We are sure people would walk out saying that it is a beautiful film because while the action is fantastic, the emotions touch you in a big way too," says John.


Meanwhile, he is making a conscious choice to make films which stand out from the crowd. This time around, he and Sunir are collaborating on Rocky Handsome and John is confident about extending the winning streak.


"It is very important to keep making films which are different from each other," says John, "Rocky Handsome is very different from Madras Cafe or Vicky Donor. It is very commercial though. My intent is very clear; when people go and watch a film where JA Entertainment's name is associated, it needs to have the right content with right quality. Why just the audience, even I won't settle for anything lesser," John says.


"What we, as producers, are guaranteeing to the audience from the perspective of Rocky Handsome is simple. You will get to see an emotionally charged film which has possibly the best hand to hand combat action sequences ever seen in Hindi cinema. Period," adds Sunir.