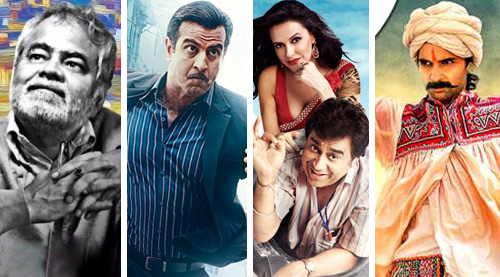 Award season has begun and thankfully a deserving film like Aankhon Dekhi has started finding good recognition. That when it was a major commercial disappointment at the box office.

We look at some other notable films that released in the recent times and could well have been successful if there was better planning around promotion, marketing and release.

One of the most acclaimed films of 2014, it was also one of the biggest commercial flops that Bollywood saw in the year. Its promotional design wasn't eye catchy, the marketing was near to nil and the release pretty much unheard of and acutely sparse. The reviews were good but by the time the word spread, the film was off the screens. Sad, really sad!

Ugly is through with its run and while it did enjoy its fair share of accolades, what with three to four star ratings gracing the film, the fact remains that its release couldn't have been more poorly placed. Though many hailed it as Anurag Kashyap's best work since his first release Black Friday, it arrived in a week when PK was still going strong (in its second week) and audience were in a celebratory mood. The strategy of merely two week marketing and promotion window with a sparse and oddly placed release hurt it in a major way.

This was a good entertainer and coupled a social message well with the kind of treatment that had glimpses of Rajkumar Hirani and Subash Kapoor feel to it. However, despite a decent promo, there was no further build up en route the film's release. Yes, it did manage to get good show timings but audience was not even aware that the film had released. A good show by Anupam Kher that went unnoticed! Thankfully, it is finding some revival of sorts in the film festivals.

Technically the film had quite a few things going right for it. After making rounds of the festival circuits, the film had something to build on for its pan-India release. However, one wonders why no one came forward to invest in it from the promotional and marketing standpoint. Yes, the film had its rough edges but it still deserved a better show than empty auditoriums greeting it. It did manage to create some buzz during the nominations for the Oscars.

A classic case of a film delivering something else while promising an altogether different tale. For a film that dealt with dowry, it was projected as a love story. This isn't all, as the very title as well as stage and setting of food went totally against it as it had absolutely no relevance to the eventual tale that Habib Faisal wanted to tell. A good film that was further hurt due to the release strategy of clashing with Khoobsurat.

A film with some of the most amateur acts on display, it also boasted of some of the best VFX that an Indian film has boasted of. Kamal Sadanah knew what he was talking about and concentrated well on making this tiger tale come alive on screen. No wonder, even with zilch marketing effort, the film did manage to cross 10 crore mark. With better promotional push, it could have covered a lot more.

A sweet little film that certainly deserved to find a lot more audience for itself than it eventually did, Filmistaan did see some decent promotional and marketing push. However, the kind of punch that makes a film a must-watch affair was missing in the week leading to the film's release. In fact, the film fetched some of the best reviews of the year but there wasn't much effort put into ensuring sustenance of audience.

There was just no awareness created around this small but high impact film by Nagesh Kukunoor who couldn't raise funds for the promotion, marketing and release. No one outside the festival circuit knew that it existed, no one was aware that there were plans to bring it to the audience and no one was forthcoming enough to release it. Result? No one except for critics saw the film and the star ratings didn't count.

One can't really blame Ketan Mehta for not doing enough to bring Rang Rasiya to screens. After all, his labor of love was stuck in the cans for years and it was a big relief that it was finally seeing the light of the day. As it happens with dated products, this one too came largely unannounced. As a result, no one could see the best performance of Nandana Sen and one of the best acts of Randeep Hooda.