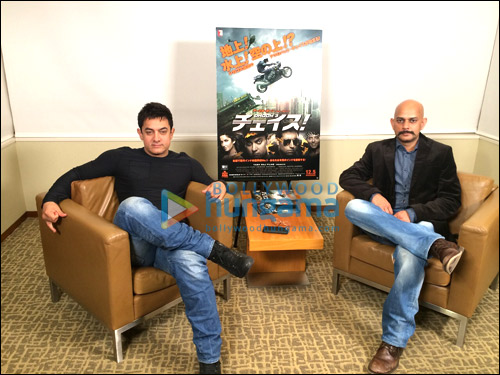 After a record breaking success in India, the third installment of Yash Raj Films' action drama Dhoom is all set to create new records internationally. Being one of the few films that released in China, Dhoom 3 now has its eyes set on Japan.

In fact for the same purpose, superstar Aamir Khan and the director of the film Vijay Krishna Acharya landed in Tokyo today, October 28 in order to present the Japanese premiere of the film at the 27th Tokyo International Film Festival which will be held tomorrow, that is, October 29. Also, the two will be kick starting an extensive promotional campaign as the film is slated to release in Japan on December 5. Also, a new first look poster of the film has been launched specially for the Japanese audience and a glimpse of the same has been given in this picture.

This is not the first time that Dhoom 3 has been receiving such a response outside the Indian market. Prior to this, the film has tasted success in many countries and it is also the first Indian film to be released in 100 screens in the country which is the biggest scale for an Indian film ever.