The generation that has watched Lagaan  that the film has Had a cult following over the years. Now 21 years later, as we listen to every beat of the AR Rahman musical, we are taken back to the powerful scenes, impactful dialogues of the film that continues to trend even today. This video shared by Aamir Khan on his official Instagram account under Aamir Khan Productions, will take the fans to the same nostalgic mode. And what more! The reunion of director Ashutosh Gowariker along with the superstar Khan, and the rest of the team is a walk down the memory lane you had want to remember. 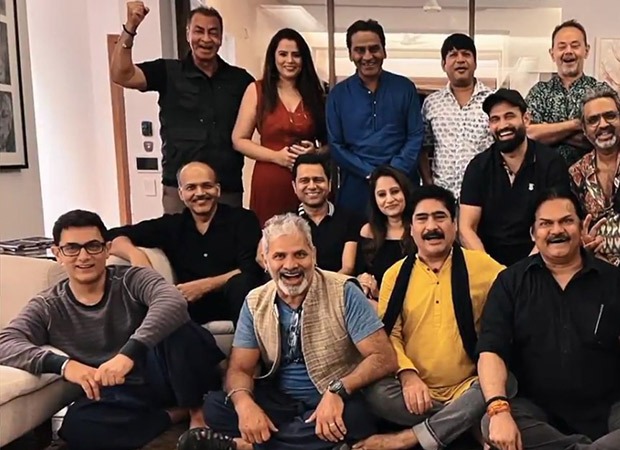 Aamir Khan hosts a Lagaan party at home along with its cast and cricketers like Irfan Pathan; fans can’t keep calm

Celebrating 21 years of its release, the team of Lagaan reunited at the superstar’s residence in Mumbai and a glimpse of the memorable evening was shared on social media by Aamir Khan on Aamir Khan Productions’ Instagram handle. Along with the superstar, amidst the guests, we could see the team of Lagaan which included director Ashutosh Gowariker along with wife Sunita, his photographer-brother Avinash Gowariker, Yashpal Sharma, Aditya Lakhia, Akhilendra Mishra, Rajendranath Zutshi, Pradeep Ram Singh Rawat, Daya Shankar Pandey, Amin Hajee among others. Also spotted at the gathering were cricketers Irfan Pathan, and Aakash Chopra.

Interestingly, the video also features an interesting game of foosball between the film and cricket world as we can see Aamir and Ashutosh team up against Aakash and Irrfan. If the video is anything to go by, it looks like a fun night of games, food, and memories. Looking at the same, fans couldn’t hold back their feelings and started commenting on the post. One fan wrote, ‘❤️❤️❤️❤️❤️❤️❤️Fav movie Ever Ever Ever ❤❤❤❤❤❤❤❤❤❤❤❤❤❤❤❤”, another one commented, “That movie always inspire me❤️”. The film also received love from international fans wherein one of them from turkey said, “????????what a wonderful idea to meet after years????what fun it has been..love from turkiye????????????????????????.”

Lagaan is a fictional historical drama (alternate history drama) set against the backdrop of British rule in India where one man named Bhuvan dreams of beating the British soldiers in a cricket match to save his community from the three times tax imposed upon them. Directed by Ashutosh Gowariker, the film released on June 15, 2001.

Also Read: Team of Lagaan to re-unite at Aamir Khan’s residence to celebrate 21 years of the film