What happens when Bollywood’s two most followed, popular actresses get together for a quiet soiree, to celebrate their friendship and you know to in general soak in their awesomeness? Well, we hapless mortals are treated to something pretty cool! That’s what happened when gym buddies and top Bollywood actresses Alia Bhatt and Katrina Kaif got together to have sweet/spicy tête-à-tête with Neha Dhupia on Vogue BBFs. The two were natural and charming as they gently trolled each other, making us go Awww #BestFriendGoals! 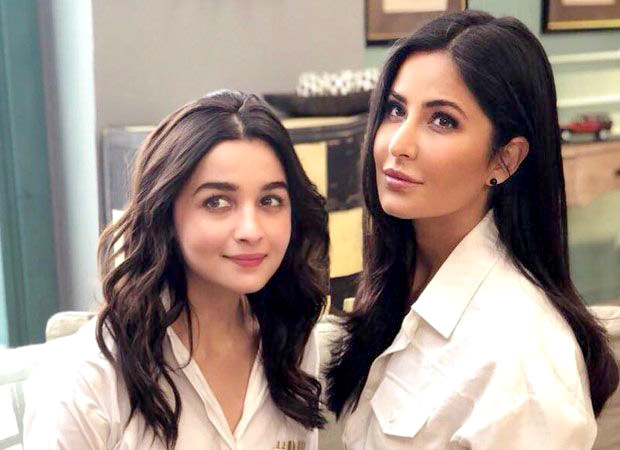 So, if you were living under a rock and missed this total dhamaal episode, we got you covered. Here is everything that went down in this show.

So, when the host Neha Dhupia asked Katrina Kaif about the well-crafted movie she was a part of, pop was the response, ‘Tiger Zinda Hai’. Her BFF was especially amused by this and did a funny snort at Kat’s shameless movie plug.

2. When Katrina almost carried Alia to the couch

Being martial arts trained, the Thugs Of Hindostan actress was all set to carry her BFF Alia Bhatt to the couch a la Hindi film hero style, but alas the fear of wardrobe malfunction came in the way!

3. When Katrina laid down the A, B,Cs of her friendship with Alia

The Zero star revealed that though she has known the Udta Punjab star since a while now, it’s only recently that they have become such thick buddies. She said that she met the Student Of The Year star at the Saltwater Café in the city and quipped on how Alia was, ‘So Cute, So Golu and like a small ..small baby’. Alia affectionately complained how Katrina Kaif takes forever to get ready to which Kat jibed, ‘I get so stressed to do anything with Alia. I keep procrastinating. There is a constant voice in my head which says, ‘Katrina, get out of the door’.

So, it is Alia’s wish to set Katrina up with ‘someone nice’ because, she is a self-confessed cupid! Kat on the other hand dreams of ‘getting Alia happily married and settled’. She said, “I feel like little bit that Alia’s older sister. I have to see her happily settled, attend her wedding, wipe her tears, wear a beautiful outfit.”

Alia confessed to Neha Dhupia that Karan Johar is a bit of wild child and makes her take reckless decisions in her life at times. Katrina on the other hand couldn’t stop waxing lyrical about Salman Khan. She went on a monologue about her ex-boyfriend and forever friend, Khan. She said, “60-70 per cent of things which Salman says are all true ...the way he says it is difficult. The manner in which he (Salman Khan) handles his fears is amazing. It’s not like he does not feel fears, the way he handles it makes all the difference. He says things in complex way, which make sense later. The way he approaches his emotions makes all the difference, he has taught me not to give in to your every emotion.”

The Thugs of Hindostan babe brought up how she is social media challenged many times through the show. She revealed how Alia Bhatt dictates what she should post on Insta and at times even edits pics for her. She also confessed how she keeps on looking her BFF’s Insta feed and copies her social media behaviour.

7. Alia’s advice to Kat: Leave the gym and meet some men!

We all know that Katrina Kaif has been single for some time now, after of course her much publicised break up with Ranbir Kapoor. Alia Bhatt’s only relationship advice to Kat was, “Stop spending so much time in gym and meet some men!”