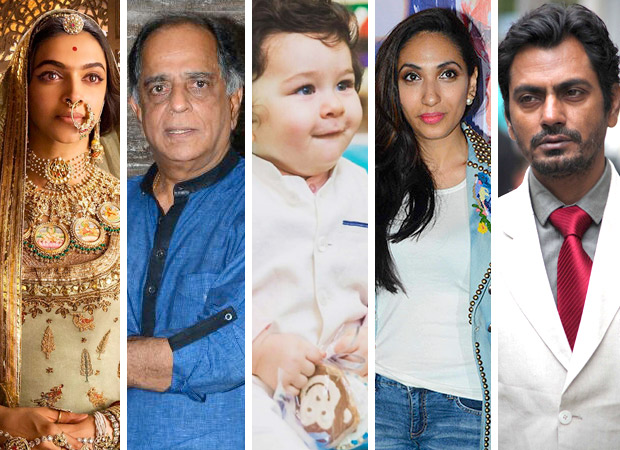 2017 was the year when the 'P' squad dominated news channels: Padmavati, Pahlaj Nihalani and Prerna Arora. Here's looking at the top newsmakers of the entertainment business in 2017.

1. Padmavati: More newsprint and media space went into discussions, debates and diatribes on this one film than any other in the history of Indian cinema. As a producer with a penchant for being in the news said to me, 'Agar ek film ko protest se itni publicity mil sakti hai toh phir paise laganee kikya zaroorat hai? Dimaag lagao aur publicity luto (if a film can get so much publicity through protests why spend money? Use your brains and enjoy the publicity).' This producer of course thinks he has got the film's marketing arithmetic right. But the flak and abuse including charges of sedition and desh droh have been hard to deal with. The film's director Sanjay Leela Bhansali has sworn off historicals.

2. Pahlaj Nihalani: Breathe in breathe out…The former chairperson of the CBFC continued to make news for a large part of the year. Whether it was his run-in with the makers of Lipstick Under My Burkha or Babumoshai Bandookbaaz the man grabbed headlines, attracted trolls and managed to give many inconspicuous films a run for their money and some money for their run (at the box office). In August, Nihalani was sacked by the new I & B minister Smriti Irani. Even now when he is no more, Nihalani makes more news than the current CBFC chairperson Prasoon Joshi.

3. Taimur Ali Khan: Errrrrrr… the youngest superstar of India? At 1, Saif Ali Khan and Kareena Kapoor's son is a bigger star than his parents. He is clicked and splashed in all the papers and websites more regularly than his star-parents and is way ahead of the other star-kids of Bollywood in the social media. Yup, even Shah Rukh's AbRam. Throughout the year Taimur occupied media space more so than even Anushka Sharma and Virat Kohli did during the year…until his first birthday when the adorable moppet's first birthday was overshadowed by the Anushka-Virat wedding. Awwwwww!

4. Prernaa Arora: Easily the most rapidly-rising independent film producer, Prernaa Arora's success has been swift and surefooted. She began her career as an independent producer in 2016 with the successful Rustom, the film that won Akshay Kumar his first National award. In 2017 she co-produced Toilet - Ek Prem Katha, another game-changer. By the end of 2017, Ms Arora was associated with a truckload of top notch productions including the on-release Padman, Parmanu: The Story Of Pokhran (said to be John Abraham's career-defining film) and the Anushka Sharma-helmed Pari. Undoubtedly Prernaa Arora is the most successful independent producer in Bollywood since Sajid Nadiadwala. And yes her career is dominated by the 'P' factor (please note the titles of her forthcoming films).

5. Nawazuddin Siddiqui: A premature memoir where he spoke less than graciously about the women in his life put Nawazuddin in the dock. The actor was mercilessly flailed for his tactless cheesy attitude to women. Through a major part of the year Nawaz was more in the news for his book than his performances. At year-end came some relief from the sordid controversy when Nawazuddin was not dropped from the Bal Thackeray bio-pic. Jaan bachi too croreon paye.