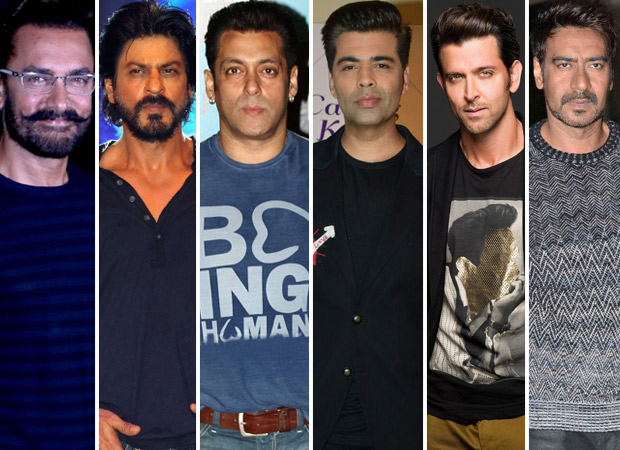 The microblogging site Twitter gives a daily dose of celebrities in limited characters. From wittiness to inspirational words, celebrities use the social media site for everything.

Here are the most retweeted tweets from the actors in the year 2017:

1. Aamir Khan (Retweets- 22,688 and counting)
Aamir Khan had visited Turkey earlier this year to promote his movie Secret Superstar which was his production starring Zaira Wasim in the lead. While visiting Turkey, Aamir Khan had stopped by an ice cream shop. For those who are unaware, the Turkish ice creams vendors are quite famous on social media especially for their tricks with their customers before handling them their order. Aamir shared a video which showed him trying to grab an ice cream from the vendor while getting tricked several times.

2. Shah Rukh Khan (Retweets- 20,894 and counting)
Every year, Shah Rukh Khan comes to the porch of his bungalow to greet his fans on his birthday on November 2. This year was just the same with little Abram Khan joining him to greet the massive crowd. SRK clicked a selfie with the crowd and thanked them for showering love.

A ray of sunshine... A sea of love...
Thank you all for the happiness you bring every year! pic.twitter.com/teTr4FRGC7

3. Salman Khan: (Retweets- 15,300 and counting)
Although Salman Khan is not a daily user of Twitter, he sure has a lot of fan following on social media. As his latest release, Tiger Zinda Hai is doing extremely well at the box office, he had released first still of himself with Katrina Kaif in March which was one of the most retweeted tweets of Salman in 2017.

BACK TOGETHER , IN TIGER ZINDA HAI . pic.twitter.com/H8D0Gv8cTT

4. Karan Johar: (Retweets- 8,989 and counting)
Karan Johar surely had the best year. The filmmaker collaborated with SS Rajamouli to present Baahubali 2: The Conclusion in Hindi in cinemas and the result was just mind-blowing. The film crossed a massive milestone worldwide and the celebratory tweet topped for Karan which was followed by the announcement of his twins Roohi and Yash.

The biggest milestone has been reached by the biggest blockbuster of Indian cinema!!!! #1000croreBaahubali @ssrajamouli pic.twitter.com/3zjExCl0J9

5. Hrithik Roshan: (Retweets- 8,621 and counting)
The year began with the possibly the biggest clash at the box office. Hrithik Roshan starrer Kaabil and Shah Rukh Khan starrer Raees both were releasing on Republic Day weekend. It seemed like things were not good between the two stars until Hrithik took to twitter to share his best wishes for SRK. The Kaabil star took to Twitter to share a message for his 'mentor' Shah Rukh Khan which was one of his best tweets of the year which was followed by his statement regarding Kangana Ranaut controversy.

Dear @iamsrk today as a mentor Im sure u will inspire me yet again with #Raaes and as a student I hope you are proud of me with #Kaabil.

6. Ajay Devgn: (Retweets- 8,021 and counting)
Ajay Devgn made an announcement about him starring in historical action drama titled Taanaji - The Unsung Warrior. The film will tell the story of the brave Maratha warrior Tanaji Malusare. Error! Hyperlink reference not valid.Ajay unveiled the poster of this film on Twitter and it surely grabbed eyeballs.

He fought for his People, his Soil & his King Chhatrapati Shivaji. The unsung warrior of glorious Indian history, Subedar Taanaji Malusare. pic.twitter.com/3qTWvKdbol

7. Amitabh Bachchan: (Retweets- 6,851 and counting)
Amitabh Bachchan, undoubtedly, is the most followed Indian celebrity on Twitter and a very regular Twitter user. So, when Aishwarya Rai Bachchan and Abhishek Bachchan's little munchkin Aaradhya Bachchan turned 6 this year, he shared a couple of photographs from her birthday. One of the guests was little AbRam Khan who came to the party with daddy Shah Rukh Khan. As the two of them enjoyed the night, Amitabh Bachchan shared some priceless moments from the party which gained a lot of attention from the fans.

T 2716 - And as for this little bundle .. he wanted the fluffy 'buddhi ka baal' cone .. so we took him to the stall made one for him and the joy of getting it is just priceless .. Abram, jr Shahrukh .. delectable !! pic.twitter.com/8SMF9YsH7p

8. Ranveer Singh: (Retweets- 5,593 and counting)
As Padmavati continues to be in controversy, Ranveer Singh gained a lot of appreciation for his Sultan Alauddin Khilji look since he unveiled the first look this year. The photograph that showed him in a bath with loose tresses as he gave a menacing gaze, left Twitterati speechless.

9. Shahid Kapoor: (Retweets- 5,513 and counting)
Just like everyone, Shahid Kapoor was excited to watch the IPL 2017 season. When MS Dhoni represented Rising Pune Supergiant's team against the Sunrisers Hyderabad on Pune's home ground and finished the game in style, Shahid Kapoor was one of the celebrities who praised him for his amazing performance.

The sleeping lion is awake. Never put a great man down. Dhoni is,was and always will be a class act.

10. Varun Dhawan: (Retweets- 5,179 and counting)
Who would have thought Varun Dhawan would come under Mumbai Police's radar? Mumbai Police slammed Varun when he was found to compromise his safety on the road. In a series of pictures, he was traveling in his plush car and was stuck in traffic when a fan in an auto rickshaw saw him and asked for a selfie. Varun got out from the window of his car so that the selfie can be taken. He was criticized by Mumbai Police as they reminded him that he's a responsible youth icon and hence such actions aren't expected from him. He was quick enough to apologize on Twitter.

My apologies ?? Our cars weren't moving since we were at a traffic signal and I didn't want to hurt the sentiment of a fan but next time I'll keep safety in mind and won't encourage this. https://t.co/MEJk56EksG

11. Arjun Kapoor: (Retweets- 3,570 and counting)
Arjun Kapoor's top tweet included a safety message for the people for Delhi. A couple of months ago, he shared a video of Delhi engulfed in fog.

What's happening in Delhi is dangerous in more ways than one can imagine...I'm filming here as I type this and I'm fearing things aren't gonna really get any better... pic.twitter.com/hvj5bcUxlN

12. Akshay Kumar: (Retweets- 2,337 and counting)
Akshay Kumar is currently promoting Salman Khan, Aamir Khan, Hrithik Roshan, Ajay Devgn  in the most interesting way. He has created a Twitter moment wherein one can find everything related to Pad Man and promotions. So, this tweet is gaining a lot of attraction and is also most retweeted one.