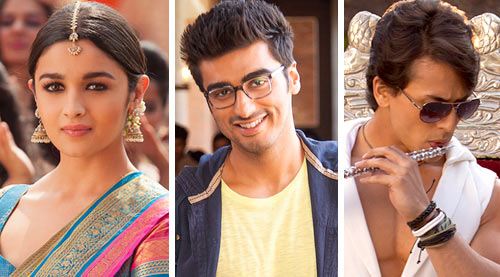 Filmmakers and producers are constantly in a bid to find new faces who can add freshness to the story of a film. Young minds and their innovative attitude is what will help them move up the ladder and this year seems to have been lucky for many of them who are still in the stage of finding a ground in this competitive industry.


Despite the rule of Khans and other A-list actors and actresses, some of the newbies have not only managed to make their presence felt but have even marked their territory in the 100 crore club owing to their selection of right films. Let's rewind and take a look at the stars who have managed to break through the clutter with their 'out-of-the-box' films.


After her debut in 2012 (Student Of the Year), we could not get a glimpse of Alia Bhatt in 2013 but when she appeared in 2014, she not only started the year with a bang but she has been one of the most successful actresses of this year. Her second film Highway was neither over budget nor highly glamorous unlike her previous Dharma film but this one not only gained her accolades, it also got her the audience's applause for her excellent acting skills. Right after two months, Alia Bhatt managed to showcase her versatility once again with 2 States where she played the role of a Tamil Brahmin. This love story that defines the nuances of different castes in India, managed to enter the 100 crore club. And last but not the least, Humpty Sharma Ki Dulhania with her Student Of The Year co-star Varun Dhawan, yet again managed to earn good box office collections. All in all, with three consecutive hits, Alia Bhatt surely has a lot more to look forward to in coming years. Her upcoming films include Shandaar and Udta Punjab with Shahid Kapoor.


After Ishaqzaade, Arjun Kapoor's Aurangazeb failed to fulfill the high expectations, especially after his wonderful debut act as Parma, in the violent romantic drama. However, 2014 seems to have changed the fate of the actor, considering his two films Gunday and 2 States managed to garner critical and mass appreciation. While Gunday showed his amazing camaraderie with co-star Ranveer Singh, the sizzling chemistry with Alia Bhatt seems to have got him a place in the 100 crore club. Considering the growing popularity for this bearded hunk, all eyes are now set on his upcoming film Tevar, a quintessential masala entertainer which will release in January 2015.


Being the son of Jackie Shroff, the debut of Tiger Shroff was an eagerly awaited one. And his debut film Heropanti managed to make him a star overnight, just like his father. Though he just had one release this year, Tiger has managed to sign about two films post the release of Heropanti. Tiger will soon be seen in Sabbir Khan's Heer Ranjha and Remo D'Souza's dance thriller with Jacqueline Fernandez. Though he is currently enjoying the privileges of stardom, let's hope Tiger Shroff manages to break the adage 'one film wonder boy'.


Varun Dhawan did not make the debut in a clichÃ©d Bollywood style as the perfect hero. In fact, his first film had a plot revolving around a love triangle, where he doesn't actually end up with the leading lady of the film. But that didn't stop him from playing the Bollywood 'boy next door' in Main Tera Hero with aplomb. Not only did he romance two ladies (Nargis Fakhri and Ileana D'Cruz in the film) but the film was also one of the first hits of 2014. His next film Humpty Sharma Ki Dulhania obviously had names like Dharma Productions associated with it and adding to the success was his stunning chemistry with co-star Alia Bhatt. But, Varun's versatility gets a new shade with his anti-hero character in Badlapur. Varun Dhawan has also been roped in to play the male lead in ABCD 2 and he has signed Fault In Our Stars remake with Deepika Padukone.


What makes the young generation achieve their share of fame and stardom is their versatility and Sidharth Malhotra's films managed to cash in on the different kind of roles he did in 2014. While we saw a responsible, ambitious Abhimayu Singh in his debut film, we got a glimpse of his carefree attitude who was constantly confused about life in Hasee Toh Phasee. But what surprised his fans was his role as a quiet, mysterious gangster in Ek Villain. The film managed to have a record breaking opening and went on to rake in more than Rs. 100 crores.


She started her career in Bollywood with a miniscule role in Aisha but her career seems to have taken a new turn in 2014. Her 'badass' friend act in Queen received rave reviews. Her avatar in the film managed to impress filmmakers too and she bagged the leading role in The Shaukeens. This remake of a cult comedy also managed to do average business at the box office and gave an opportunity to Lisa to showcase her talent extensively.


Couple of years ago, Ali Zafar managed to win hearts with a small budget film Tere Bin Laden which received a tremendous response owing to the word of mouth promotions. However, in 2014, we saw yet another Pakistani import Fawad Khan entering the Bollywood scene. A debut with Sonam Kapoor and the chance to play a prince in a Disney fairytale romance was nothing short of a dream come true. But what added to his success, was the perfectly timed launch of the Indian channel Zindagi featuring Pakistani content which contributed to his popularity in the country with the popular series 'Zindagi Gulzar Hai'. Now not only has the actor bagged another project with Sonam Kapoor (Battle of Bittora), but he has almost every woman drooling over his looks and charming personality.