Well, 102 Not Out is in news, courtesy, Rishi Kapoor and Amitabh Bachchan’s return to the big screen together after over two and a half decades. Now that this Anthony and Akbar are ready to rock the screen as the father-son duo, there is yet another intriguing element added in the film. We will have Rishi Kapoor crooning a song for the first time in his career for 102 Not Out titled ‘Badumbaa’. 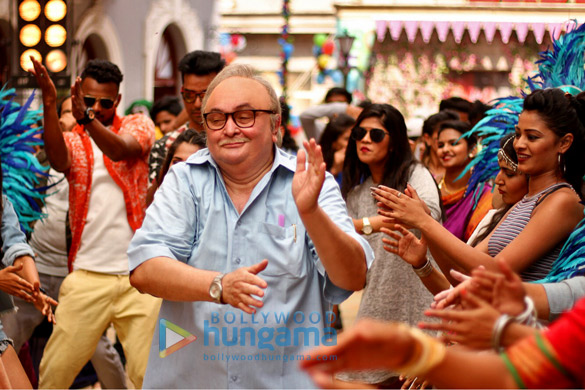 His co-star Amitabh Bachchan has crooned for some amazing numbers in the past. But this will be quite unique for Rishi Kapoor. Interestingly, Amitabh too will be singing ‘Badumbaa’ along with Rishi. It is a fun, lively and foot tapping number that has even been composed by Mr. Bachchan.

A source close to the project said, “During the last day of the shoot, the team was having a discussion about how 102 Not Out should also has a song featuring both the actors. Mr. Bachchan instantly gave a nod to the idea and even said that he would compose the song himself.  When Umesh Shukla, the director approached Rishiji to sing the song, the actor was apprehensive initially but he said that he would like to do rehearsals first and then sing.”

Talking about it, Umesh says, "When Rishiji came to the recording studio, he did the first rehearsal and after the first rehearsal itself he was himself surprised to discover his singing talent. We did not have have to do many retakes as his first one time was perfect."

While we haven’t seen them sharing screen space in 27 years, this time around the two have decided to also sing along with acting. That should make for an interesting watch, we say!

Produced by SPE Films India, Treetop Entertainment and Umesh Shukla’s Benchmark Pictures, 102 Not Out will release this summer on May 4.

Also Read: Emraan Hashmi and Rishi Kapoor to come together for this horror thriller