Last Updated 30.11.2021 | 2:51 PM IST
feedback language
follow us on
Bollywood Hungama » News » Bollywood News » Wow! Kamal Haasan and Salman Khan to share screen space for the first time and here is what it is all about

We have seen Kamal Haasan and Shah Rukh Khan share screen space in the past. They have come together for one of the most controversial films Hey Ram that was set against the backdrop of India-Pakistan Partition. And now, the South superstar will be sharing screen space for the first time with another Bollywood superstar, Salman Khan. However, let us tell you that they are not collaborating for a film but for the TV show Dus Ka Dum. 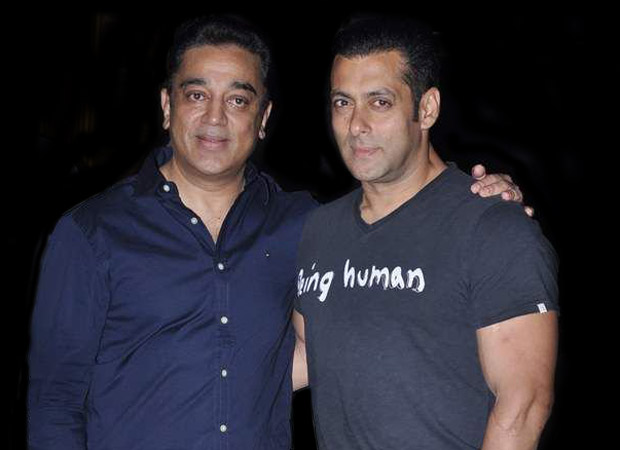 Kamal Haasan will be a part of the reality show Dus Ka Dum, which is hosted by Salman Khan. The legendary actor will be promoting his upcoming film Vishwaroopam 2 on the show.

Interestingly, there is a connection that the two stars share when it comes to TV shows. Let us remind you that both of them are hosts of the controversial reality show Big Boss. While the Hindi version of the show is hosted by Salman Khan, Kamal Haasan hosts the Tamil version of the same show. Big Boss Tamil is in its second season and recently made news when two actress-contestants locked lips during one of the tasks on the show.

In 2013, during the release of Vishwaroopam when the controversy of banning the film was all over India, Salman had taken stand and had strongly appealed his fans to watch it. Salman also attended the special screening of the film held by Kamal Haasan. Now yet again it seems that the superstar is planning on supporting his South superstar friend with this gesture on Dus Ka Dum. Well, we must say it would be interesting to see the two of them come together on the small screen. Let’s hope that they plan another outing for a big screen too soon.

Vishwaroopam 2 also stars Pooja Kumar, Andrea Jeremiah, Shekhar Kapur, Rahul Bose, Jaideep Ahlawat and Waheeda Rehman. The film has been written, directed and produced by Kamal Haasan. It is a bilingual shot in Tamil and Hindi, and is also dubbed in Telugu. The Hindi version of the film will be presented by Mr Rohit Shetty and Reliance Entertainment. Vishwaroop 2 is scheduled to release on August 10, 2018 worldwide in all three languages.

Also Read: Vishwaroopam 2: 4 Bollywood connections that you can’t miss in this trailer of the Kamal Haasan starrer