Ajay Devgn will be next seen in De De Pyaar De which will feature Alok Nath in a prominent role. The makers and the actor were criticized for keeping Alok Nath in the film amid the sexual harassment allegations against him. Tanushree Dutta has slammed Ajay and the makers for not editing out the veteran actor. "Tinsel town is full of liars, showoffs and spineless hypocrites. And it seems by a large public consensus that the signpost is pointing currently at Ajay Devgn," she said in a statement. 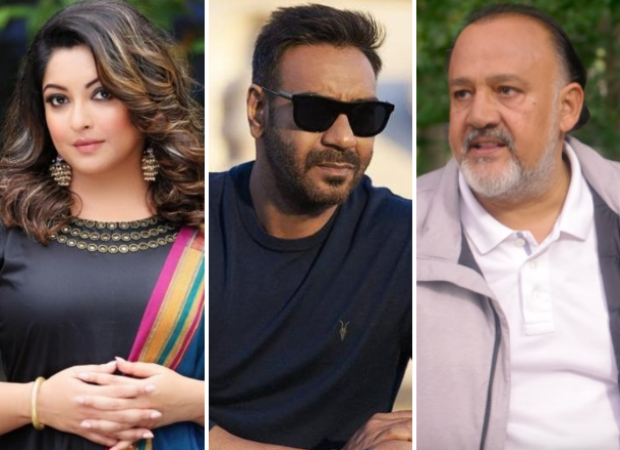 Tanushree Dutta further slammed in an open letter how big heroes are complete zeroes. "During the #metoo movement in India, Ajay Devgn actor had tweeted and sworn never to work with those accused and now in a surprising and convenient turn of events is working with rape and harassment accused Alok Nath and supporting him make a comeback to Bollywood. Doesn't this prove yet again that your big Bollywood heroes are truly zeroes! Overrated actors and human beings who have created clout by clever PR machinery and careful manipulation of public sentiments, old stuffy morons who can't tell the difference between what's right and wrong and what is the need of the hour!," she added.

"So would it be so difficult to just edit out Alok Nath's portions in the film and hire someone else and reshoot those bits even before the film promotions started?? Nobody even knew before the posters and trailers that Alok Nath is in the film so if Ajay Devgan and the makers wanted they could have just quietly replaced him and re-shot his portions (which is barely 10-15 days for character actors in Bollywood)and given Vinta Nanda the respect she deserves as well as several other women who were troubled by this guy but No! they had to keep the alleged rapist in their film and rub it on not only Vinta's but on all our faces as a show of solidarity with all rapists, molesters and harassers of Bollywood and an even greater show of arrogance and defiance against all things morally and conscientiously right.

It's time India wakes up and stops worshipping these morally bankrupt actors, directors, producers and others who clearly put on a facade of being family men just to promote their careers that they build on the tears of women like Vinta and others whom they silence using their muscle power. If you dig deep you will find skeletons in their closets so horrendous that it will totally make sense why they would stand supporting the accused rapists, harassers and abusers and why their conscience doesn't prick them while doing so and why they give evasive answers when questioned. Birds of a feather always flock together and that's why perhaps it doesn't bother some of these people to work with a guy who has been accused by several women of horrendous behaviour and that's why there's always an excuse.

The law and order in India has always been skewed against the victims of sexual crimes and that's why the criminals have always been out on bail,the burden of proof always on the poor woman and hence justice in court has been a far fetched dream mostly apart from very few exceptions that too after years perhaps. But now we know that even the bigwigs of Bollywood not only love to support such creepy individuals but when u question them they give weird answers!

The disgrace is not in the question or the topic but in your own conscience and soul!! You are the disgrace!

I hope and pray that someday Bollywood can be free of such lowlifes enjoying the adulation of millions but socially so irresponsible. We need to have real heroes and heroines in Bollywood,real men and women who stand up for the dignity of helpless folks, be living examples of compassion, goodwill, and heroism and make a real impact in the nation by using their power and position to help rather than derail movements such as #metoo and other causes and lead by example. Till then no option but to put up with these fake heroes and their even faker rag doll heroines!! -Tanushree Dutta."

De De Pyaar De stars Tabu and Rakul Preet Singh and is slated for May 2019 release.