It is a known fact that Suriya is gearing up to shoot his next, his first time collaboration with director Selvaraghavan, NGK. The Tamil action thriller will feature the superstar in an intriguing role and he recently left off to Rajahmundry, Andhra Pradesh to start the shoot of the film. However, unexpectedly the shoot of the same came to a sudden halt when the actor was mobbed. 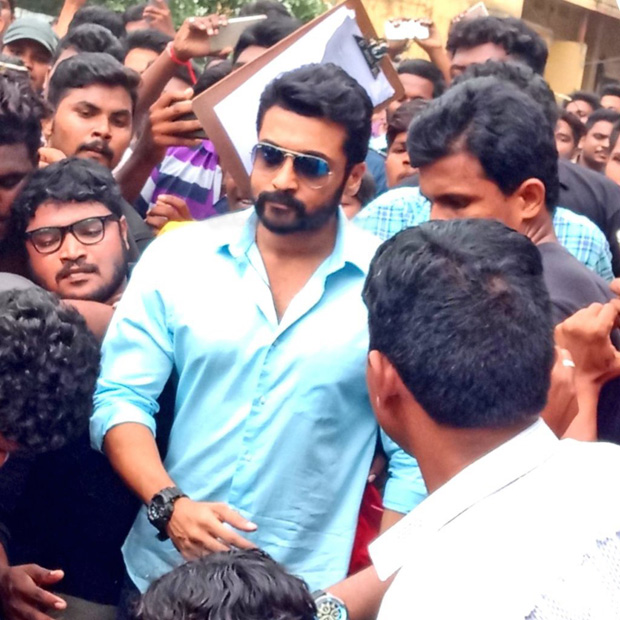 It so happened that when the people around got a whiff of Suriya being around, a horde of public crashed the sets of the film. When Suriya got out of his vanity van to kick start his next shot, he definitely wasn’t in to see 5000 people waiting outside to meet him. Followed by the same, the actor was surrounded by public and even the security was unable to manage the crowd. The video of what transpired on the sets of NGK have started doing the rounds on social media.

While most of the times an intense security is generally provided to the stars in varied locations, it seems that this time around, the team was caught by a surprise. Suriya was reportedly expected to walk further only a few steps to get till the venue. But owing to the announcement of the actor shooting in Rajahmundry, the crowd had found a way to meet their favourite star. The crowd was not only howling and cheering when Suriya arrived out of the vanity van but some of them even tried taking selfies.

Owing to the chaos caused by the fans arriving at such large numbers, the shooting of NGK eventually was cancelled for the entire day. Also, the team of the film ensured that the next day when they started shooting, they were well prepared. They reportedly had ample security to take measures in case such a situation repeats.

Here’s a glimpse of how Suriya got mobbed in the area where he was shooting for NGK.