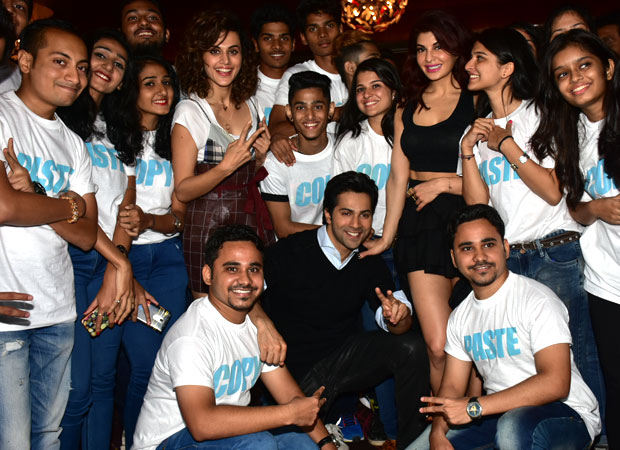 When the Judwaa 2 makers announced a few months ago that they want real-life twins to grace the trailer launch of their film, it was seen as a great idea. After all, it was unique, never tried before and it also went with the theme of the film, that deals with twins.

Sadly, this well-promotional plan went for a toss. 50 pairs of twins were selected from a Twitter contest for the trailer launch. They were supposed to be a part of the trailer unveiling and they were also promised 30 minutes with the film’s star cast – Varun Dhawan, Taapsee Pannu and Jacqueline Fernandez. Sadly, a pair of twins crossed the line of decency. The guys jumped the security cordon, pushed aside the bodyguards and charged towards Jacqueline Fernandez. They wanted to click selfies with her but sadly, they got uncomfortably close. Jacqueline Fernandez at first obliged but their aggression put her off.

At this point, Varun Dhawan came to the rescue. He asked the twins to leave. The interaction of the twins with the cast and crew was also cancelled. This dampened the spirits of the other twins present at the launch. Varun Dhawan understood their plight and he shifted the interactive activity from PVR Juhu, where it was originally supposed to take place, to Novotel, a five-star hotel nearby. Varun Dhawan, Taapsee Pannu and Jacqueline Fernandez were to shoot for digital promos of Judwaa 2 and they squeezed out time to meet with the fans.

Reportedly, the Judwaa 2 team decided not to take legal action against the errant twins. They were promptly booked on a flight home.

Judwaa 2 is directed by David Dhawan and is all set to release on September 29.