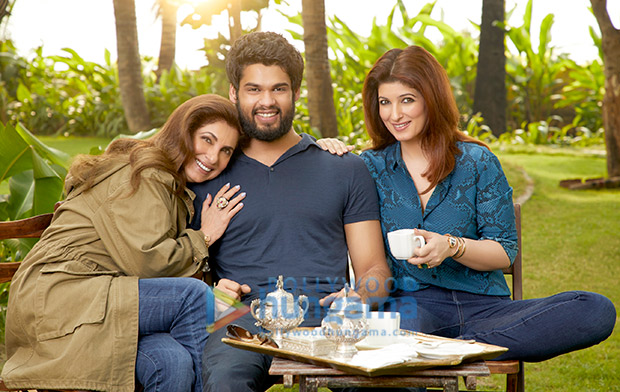 While Twinkle Khanna is enjoying the holiday season with hubby Akshay Kumar and family, her cousin Karan Kapadia is now gearing up for a work filled 2018 since he is all set to make a debut next year. Amongst many star kids, Karan Kapadia, who is the son of late actress Simple Kapadia, will now be making his debut in action packed entertainer.

The 24 year old nephew of Dimple Kapadia lost his mother at the tender age of 15 and has always maintained that his aunt has brought him up and has been the source of his strength. Elaborating on their relationship, Karan stated that he has always been comfortable discussing the professional as well as personal aspects of his life to his aunt.

In fact, when he wanted to become an actor, he first broke the news to aunt Dimple Kapadia and cousin Twinkle Khanna. Talking about his dream on entering Bollywood, Karan revealed that he had expressed his dream of joining the industry when he was as young as 16. Although it took everyone in the family by a surprise initially, he also added that they knew it was inevitable considering that he has always grown around the sets of films as a child. He also spoke about the immense support he received from all of them including Twinkle’s superstar hubby Akshay Kumar.

However, it hasn’t been easy for the budding actor to prep for films. He seems to have followed the advice his aunt gave him and that was to work hard. He has faced his own share of battles which includes reducing from 112 kgs to a healthy 88 kgs for his debut. Furthermore, he has also learnt acting from Jeff Goldberg Studio and is trained in martial arts for over six months from Bangkok. He revealed that he has even taken up lessons for bike and horse riding, swimming among others.

His big Bollywood debut which is yet to be titled will be directed by Behzad Khambata and is produced by Shrikant Basi, Nishant Pitti, Vishal Rana and Tony D’Souza. Interestingly, Karan Kapadia has previously assisted Tony D’Souza whilst the latter was directing the Akshay Kumar starrer Boss.