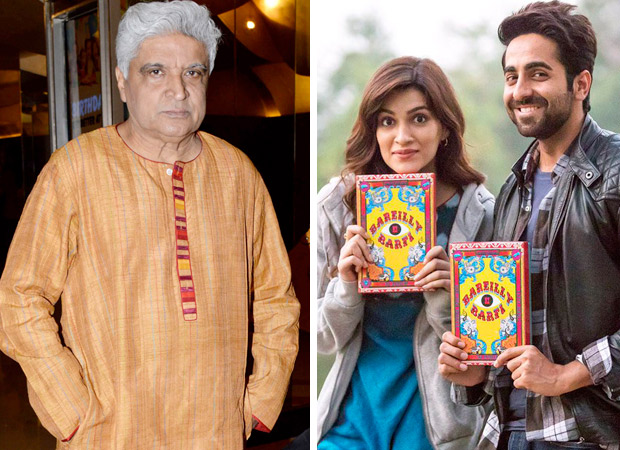 While his poetry continues to create magic across the country, the veteran writer Javed Akhtar is looking forward for a new role in a forthcoming film. Javed Akhtar will be a narrator in Ashwiny Iyer Tiwari’s film Bareilly Ki Barfi.

Talking about this, Ashwiny who was on a lookout for someone with an understanding of the language and expressions yet narrate the plot with a tinge of humour was more than happy to have Javed Akhtar on board. She revealed that even though it is just a voiceover, he is a key character in the film.  Further elaborating on the concept and the role played by the narrator, the filmmaker mentioned that he is one of the neighbours who have witnessed the interesting life journey of the Mishra family.

Readers may be aware that Bareilly Ki Barfi is set on the backdrop of a small town in UP and considering the close proximity of the houses in these areas, most of the neighbors are aware of all the happenings in each other’s house. Keeping this point in mind, Ashwiny decided to have Javed Akhtar as the narrator in the film.

It seems that it was the producer of the film, BR Chopra’s grandson Kapil aka Juno Chopra who initially approached Javed Akhtar for the role and was instrumental in making him a part of the film. Maintaining how life has come a full circle, Juno reminisced about how Javed Akhtar helped his father Ravi Chopra whilst he was directing Baghban to pen the finale of the film and even now Juno is thrilled to have Javed Akhtar in his film as a narrator.

Starring Kriti Sanon, Ayushmann Khurrana, Rajkummar Rao in leading roles, Bareilly Ki Barfi, produced by Junglee Pictures in association with BR Chopra production, is an adaptation of the French novel ‘The Ingredients of Love’. It is slated to release on August 18.