Being one of the most awaited films of the year, Rajinikanth is gearing up for 2.0, the sequel to his much celebrated sci-fi film Robot. On the other hand, Kamal Haasan is working on the sequel to his controversial film Vishwaroopam. The two superstars are quite obviously busy with one of their most ambitious projects respectively. But what happens when the two films are being touted to release on the same day? The said day is Independence Day. 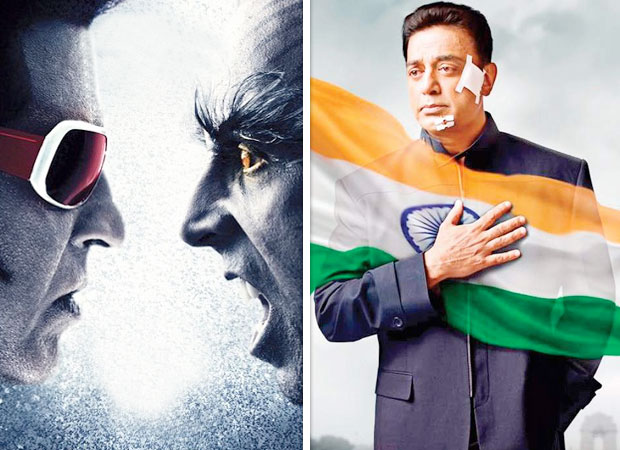 If recent reports are to be believed, Rajinikanth starrer 2.0 and Kamal Haasan starrer Vishwaroopam 2 are expected to release on August 18. Both films are in news for their own reasons! 2.0 will see megastar Rajinikanth being pitted against Akshay Kumar for the first time as the latter plays antagonist. Featuring Amy Jackson as the leading lady, the release of this sci-fi film has been postponed over three times owing to the heavy VFX required. While it was supposed to release last year during Diwali, the release date of the film continues to be tentative.

On the other hand, Vishwaroopam faced heavy backlash when its prequel released way back in 2013. The film was being banned in several states with Muslim organizations, who cited certain scenes to be objectionable to Islamic audiences. With the film facing ban in India and abroad, Kamal Haasan finally signed a mutual agreement with these Islamic groups by agreeing to mute five scenes in the film. Let us hope that the release of sequel is smooth!

In fact, Bollywood films too are facing date constraints when it comes to Independence Day. If 2.0 releases on the said date, two of Akshay Kumar films will be releasing on the same day. Readers may be aware that the Bollywood star’s period film on India’s first hockey win post-Independence, Gold is slated to release on the same day. Directed by Reema Kagti, the teaser of this Excel Entertainment production is already released.

Also Read: Rajinikanth, Kamal Haasan and other South celebrities condemn the killings that happened during Sterlite protests in Tamil Nadu