He has been one of the most non-controversial celebs in Bollywood but A R Rahman suddenly came under scrutiny recently. He was surprisingly attacked by many for being regressive when his daughter Khatija appeared in a veil covering her face, niqab style, for interviewing her father during an event recently. Calling out to the social media attacks and trolls, while Khatija shared a post on social media, A R Rahman clarified on the matter on Twitter. 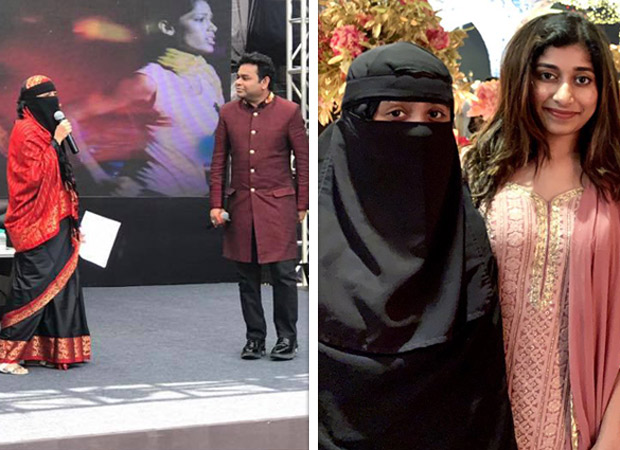 Recently, Khatijaa was introduced on stage during an event which celebrated the 10th anniversary of Slumdog Millionaire. A R Rahman had gone on to win Oscars for the film’s album and the event saw his daughter interviewing her music maestro father. When she appeared at the event covering her face in a niqab style, the said video went viral and many fans started bashing the musician. According to them, Rahman promoted regressive thoughts and it claimed that he forced his daughter to wear a hijab during public appearances.

Shocked by the allegations directed towards him by trolls and messages on social media, Khatija Rahman went on to clarify on the matter. She took to Facebook to share her thoughts on the ongoing controversy by maintaining that she has been wearing the hijab out of choice and promoted the concept of #FreedomtoChoose. She wrote, “The recent conversation of myself on stage with my dad has been doing the rounds although I didn’t expect such an overwhelming response. However, there were certain comments which said that this attire is being forced by my dad and that he has double standards. I would like to say that the attire I wear or the choices I make in my life does not have anything to do with my parents. The veil has been my personal choice with complete acceptance and honour. I’m a sane mature adult who knows to make my choices in life. Any human being has a choice to wear or do what he/she wants and that’s what I’ve been doing. Hence, kindly don’t make your own judgements without understanding the exact situation.”

A R Rahman, on the other hand, took on the trolls by sharing a picture on Twitter. He supported his daughter’s statements by sharing a picture of his family with Nita Ambani wherein while Khatija sported a hijab, his other daughter Raheema was seen without it. His wife Sairaa too wasn’t seen wearing a hijab.

Also Read: Here’s what A.R Rahman feels about actors singing in their movies