As we all know, the 70s classic Pati, Patni Aur Woh starring Sanjeev Kumar, Vidya Sinha and Ranjeeta is all set to get a new twist! And the 2019 rehash version will have Kartik Aaryan, Bhumi Pednekar and Ananya Panday in lead roles. The final cast was recently announced on social media by the producers and the star cast too shared their excitement on the same platform. 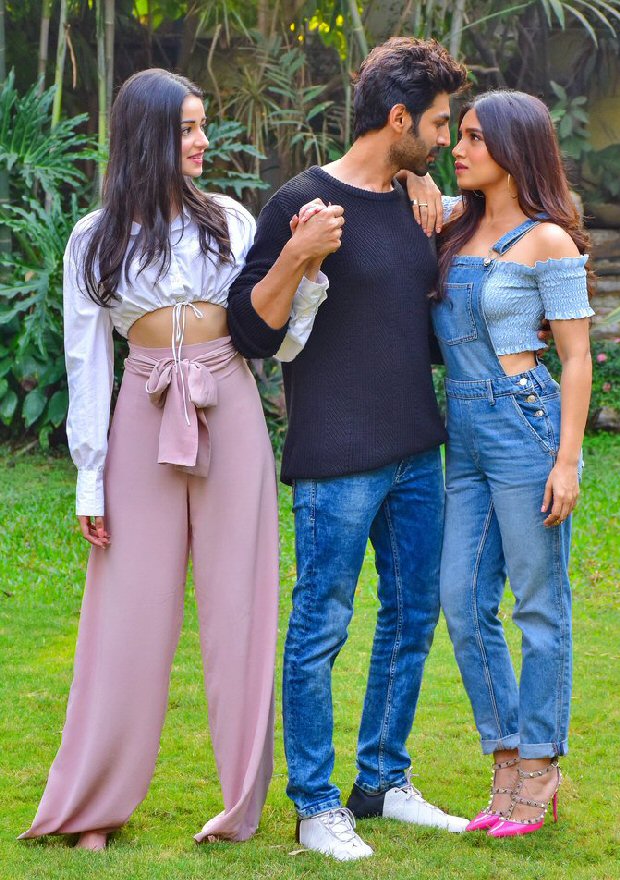 Producer and head honcho of T-Series, Bhushan Kumar took to Twitter to share a photo of the entire team of Pati, Patni Aur Woh. Besides the cast, the picture also included director Mudassar Aziz and producers Juno and Abhay Chopra, Renu Chopra and Bhushan Kumar himself. He posted the picture saying, “Our next project! ?? #PatiPatniAurWoh to go on floors soon! Sending my good wishes to the team. @TheAaryanKartik @bhumipednekar #AnanyaPanday @junochopra @TSeries @BRStudiosLLP #RenuChopra @abhayrchopra @mudassar_as_is”

If that wasn’t all, Bhumi Pednekar and Kartik Aaryan, who too are quite active on the same platform, shared the posts about the film and gave a brief glimpse of their chemistry. Although we aren’t sure of the details of who is playing the Patni and who will be the ‘Woh’ in Pati’s life, there are speculations that newbie Ananya will play the ‘Woh’ whereas Bhumi will be the ‘Patni’.

On the other hand, in earlier reports, the makers have clearly asserted that Pati, Patni Aur Woh will be contemporized to suit the sensibilities of the current generation. The film is a quirky take on extra marital affairs and reportedly, the makers are also quite keen on changing its climax.

Producer Bhushan Kumar has announced on Twitter that the film is slated to go on floor but the dates are yet to be revealed. Reports have it that Pati, Patni Aur Woh will be extensively shot in Mumbai itself.