Following the grand success of KGF Chapter, the production house Hombale Films has announced that they have collaborated with south-based ZEE channels for the release of KGF Chapter 2. Even as the audience awaits the release of the film, KGF Chapter 2’s south satellite rights were sold to ZEE Kannada, ZEE Telugu, ZEE Tamil, and ZEE Malayalam at a record price. Starring Yash, Sanjay Dutt, Raveena Tandon, Srinidhi Shetty, and Prakash Raj, the movie will be directed by Prashant Neel. The dark, raw, and compelling poster of the movie has already created quite a stir with the fans of the KGF Chapter franchise. 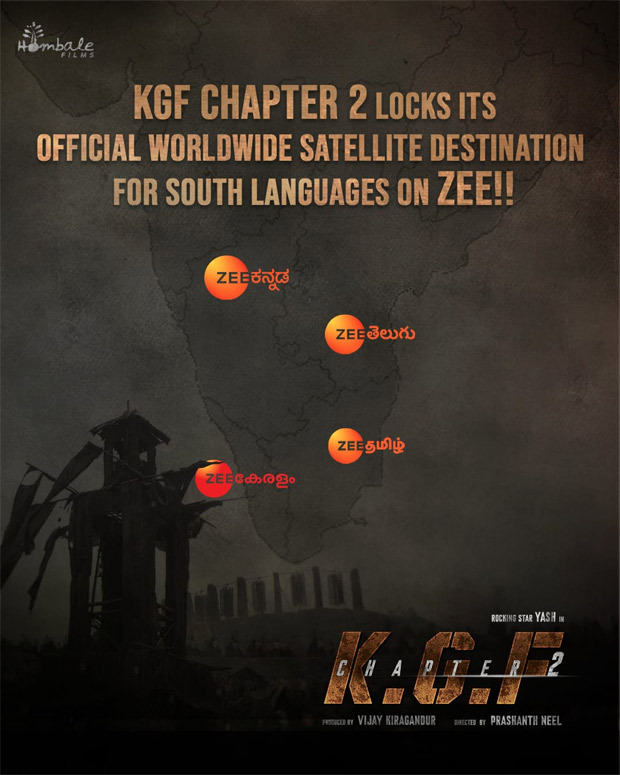 Speaking about the collaboration with ZEE, producer Vijay Kiragandur said, “We are pleased to announce that we have associated with ZEE for the satellite rights of our magnum opus KGF Chapter 2, for the southern languages. With our partnership with ZEE, we are confident to expand our reach to a wider audience. At Hombale Films, we strive to produce entertaining and compelling content shaped to cater to a global audience, while adhering to our Kannada roots. After the record-breaking success of KGF Chapter 1, the expectations from KGF Chapter 2 are enormous. The trailer of the film further added to the buzz of the action thriller. With KGF Chapter 2, we have tried to enhance the spirit & scale of KGF legacy to provide the best cinematic experience for our fans. We hope to create and witness a greater euphoria with our grand release. And we are confident that KGF Chapter 2 will be showered with the same love & affection and will script a new benchmark in the film industry!”

Director Prashant Neel added, “I am delighted that the satellite rights of ''KGF Chapter 2'' have been secured by ZEE for southern languages. I value this association with ZEE and believe with their ever-expanding network we will be able to showcase KGF Chapter 2 to a larger audience. I am thrilled with the response given to the teaser of the movie. I am certain the movie will live up to the high expectations and will write a new chapter of KGF’s legacy. I assure you all that it will be worth the wait!”