The audience is in for a treat as one of the most awaited films of the year, Thalaivii starring Kangana Ranaut, which was initially scheduled to release on 23rd April earlier this year, has now been announced to hit the theatres worldwide on 10th September 2021. Announcing the new release date, Kangana Ranaut posted - “The story of this iconic personality deserves to be witnessed only on the BIG SCREEN! Pave way, for #Thalaivii as she is all set to make a superstar entry into the world of cinema, yet again, a place where she has always belonged! Thalaivii IN CINEMAS near you on 10th September!" 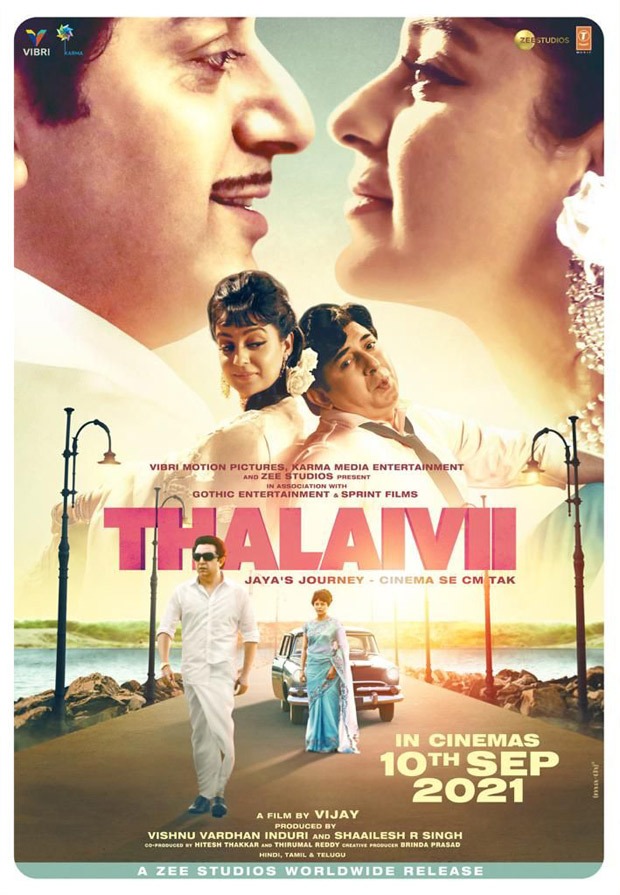 Kangana Ranaut starrer Thalaivii to release in theatres on September 10

Producer Vishnu Vardhan Induri shares, "Thalaivii has traced an extensive journey with eternal experiences at every turn. As the theatres are reopening across the nation, we are very excited that fans can enjoy the grand experience of the legend's life on the silver screen. Jayalalithaa has always belonged to the cinema and bringing her story alive on the big screen was the only way to pay homage to this great legend and revolutionary leader."

Based on the life of late Jayalalithaa, Thalaivii depicts the varied aspects of her life, tracing her journey as an actress at a young age to becoming the Face of Tamil Cinema as well as the rise of the revolutionary leader that changed the course of Tamil Nadu Politics. Slipping into the character of Jayalalithaa, Kangana Ranaut impressed the audience and critics, with her remarkable transformation to ace every phase of the actress-turned-politician's life.

Thalaivii presented the trailer of the film, citing a tale of love, loss, struggle, and power, offering the perfect amalgamation of emotions to make this a big-ticket entertainer. The trailer of the film received a massive response from the audiences and fans across! Scaling over 30 years of Jayalalithaa's life, Thalaivii promises a gripping story offering a reflection of the untold reality behind her life, backed by impactful performances and entertaining music. As the lockdown situation witnesses ease and with the theatres reopening across the country, the producers decided to release the film that was always designed and destined for the big screen experience so that masses could relive Jayalalithaa’s powerful journey.

Thalaivii, presented by Vibri Motion pictures, Karma Media Entertainment, and Zee Studios in association with Gothic Entertainment and Sprint films has been produced by Vishnu Vardhan Induri and Shailesh R Singh and Co-produced by Hitesh Thakkar and Thirumal Reddy with Brinda Prasad as the Creative Producer. Thalaivii is set to release in theatres worldwide in Hindi, Tamil, and Telugu by Zee Studios on 10th September 2021.