Kangana Ranaut will be reuniting with her Queen co-star Rajkummar Rao in an upcoming film, Mental Hai Kya. The shooting of the film began earlier in May last year in Mumbai. Kangana, Rajkummar along with their co-star Amyra Dastur were caught on the sets of the film sporting quirky looks. 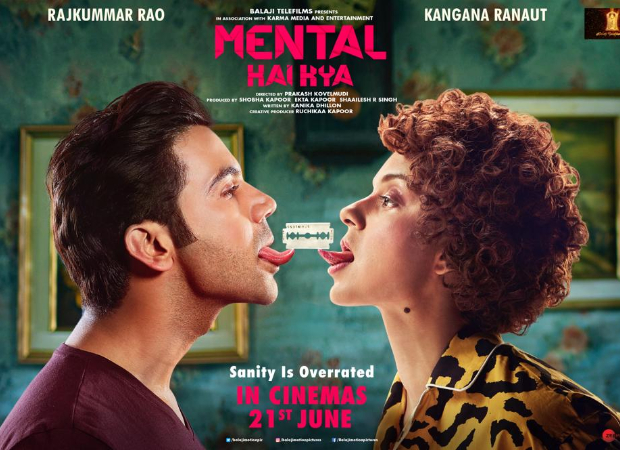 While the film was supposed to release in February this year, it was pushed ahead. Now, we have a release date for the film and it is June 21, 2019. A quirky poster was unveiled this morning showcasing Rajkummar Rao and Kangana Ranaut making goofy faces at each other with their tongues out and a blade. The actress is sporting a printed top and a curly hair wig. It's all about the craziness that cuts through.

Mental Hai Kya is the second outing of Rajkummar Rao and Kangana Ranaut after 2013 hit Queen. The film is written by Kanika Dhillon and will be helmed by National award-winning director Prakash Kovelmudi. It is produced under the banner of Ekta Kapoor‘s Balaji Motion Pictures and Shaailesh R Singh’s Karma Media and Entertainment.

ALSO READ: Kangana Ranaut’s sister wages WAR against the Bhatts, claims Mahesh Bhatt threw a shoe at her sister & Alia Bhatt is successful only because of ‘chamchagiri’