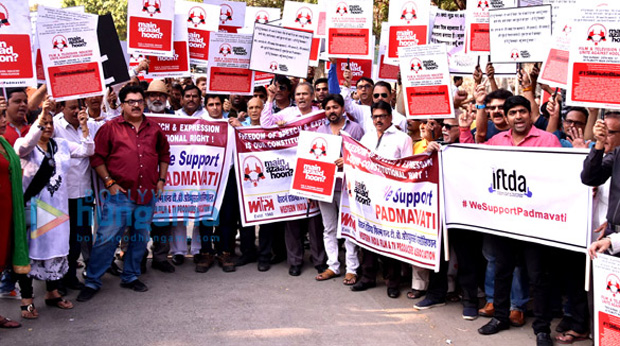 Ever since its inception, Padmavati has been facing disputes with a certain activists group who constantly seem to accuse Sanjay Leela Bhansali for distorting history in his film. With the protests getting bigger as politicians too are coming out in support of these activists by openly issuing death threats against the actors of the film as well as the filmmaker, now the industry has decided to stand in support of the filmmaker and his film Padmavati.

Miffed with the way a politician announced a bounty on Deepika Padukone [leading lady of Padmavati], Ranveer Singh [antagonist] and Sanjay Leela Bhansali, the industry has decided to retaliate silently with a mass blackout for 15 minutes. Titled Main Azaad Hoon?, this protest was observed at Film City, Goregaon which was with the intention of giving filmmakers the right to freedom of speech.

From filmmakers to technicians, many who belonged to different divisions of the industry, came out in support of the film and brought the work to a standstill during those 15 minutes between 4.30 and 4.45 pm, joining the crowd at the main entrance of the suburban studio. It also saw the participation of common people along with the fraternity who supported them in the endeavour. 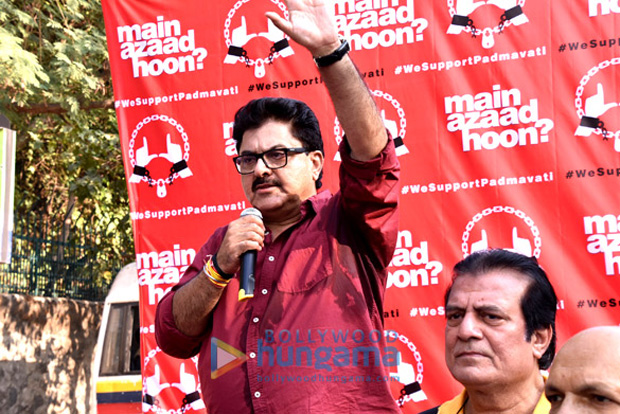 Ashoke Pandit, filmmaker and President of IFTDA [Indian Film and Television Directors’ association] asserted that not a single individual made a shot in those 15 minutes and everyone was extremely supportive of the protest. In fact, post the blackout, according to Pandit, everyone resumed the shoot peacefully. Firoz (Raja) Khan, the senior vice president of the Junior Artiste Association, further reinstated that if a director like Sanjay Leela Bhansali is facing such threats then soon it may fall upon them too. He also maintained that if such big filmmakers stop making films, then that in turn will affect the employment of many.

For the uninitiated, Padmavati that was slated to release this week, has indefinitely postponed its release. Whilst CBFC claims that Bhansali delayed in submitting the film for certification, there are rumours that the constant protests against the film has affected its release.

Starring Deepika Padukone, Ranveer Singh and Shahid Kapoor in lead roles, Padmavati is based on the epic drama between Rani Padmini, her husband Raja Rawal Ratan Singh and their fight against Mughal tyrant ruler Alauddin Khilji.