Bollywood actor Shah Rukh Khan appeared as the guest on David Letterman’s Netflix show My Next Guest. In the one hour-long episode the actor opened up about his life, his stardom, his mother, wife and children and his thoughts on several other things. 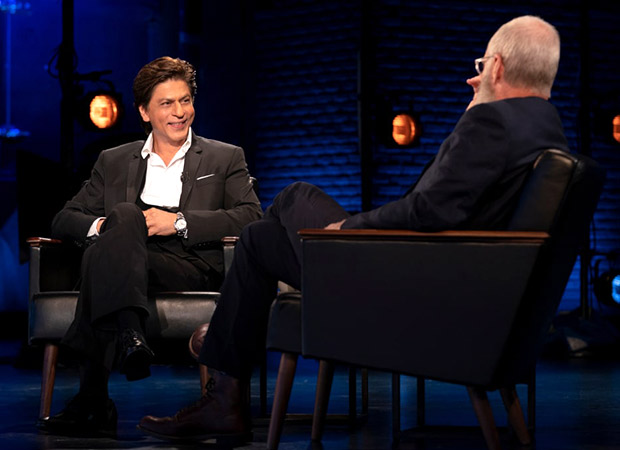 Here are some of the interesting things that Shah Rukh Khan said:

How Shah Rukh Khan had to cheat to watch a film in the theatre for the first time:

Shah Rukh recalled the incident that led him to get the first movie experience in a theatre. He said, “I wasn’t good at Hindi because I was in an Irish brothers missionary school. So, I wasn’t good at it and she said ‘If you get ten out of ten in your exam, then I’ll take you to watch a film for the first time. We were not very well to do. So to go to a movie theatre was a very big thing. So I learned these 10 words except for one. I just looked across and saw that I’d made a mistake. So I copied that one, I must tell you. I cheated. But it was my own mother so I could cheat her. And then I got ten out of ten and she took me for the first time.”

On being asked if this admission will affect his fan following: “As the Americans do, I’ll apologise publicly and you can forgive me.”

SRK on his education:

SRK on son Aryan not wanting to act:

“My son’s here at USC in LA. He’s learning how to make films. He’s 21. My son doesn’t want to act. And I don’t think he can. But in India, it like ‘okay, if you are a movie star’s son then you might become a movie star. He looks nice and he’s tall and. But I don’t think he has what it takes perhaps and he realised it himself. But he’s a good writer. I think wanting to be an actor should come from within. Something that you really feel like doing or wanting to do and then find a set of skills or learn it. But I think I realised it from him when he said that. He came and said I don’t think I want to act. He came and said that he doesn’t want to act. And his issue was which I think is very, very practical and honest. He said, “every time I’ll be compared to you. If I do well, it will not be because I got skilled at this. It will be, ‘Ohm, obviously he’s his son, so he will do well. It’s in the genes. And he said, “If I don’t do well it’ll always be, ‘My God, look at him. What his father did and look at him. What is he doing? So he says I don't want to be in this position.”

I sort out all their problems. And I hate it when they have boyfriend/girlfriend problems. I just want to say, ‘Just kick the person out’. But I say, ‘You know, in life, it happens that you have to give and take in relationships, darling.’ I hate explaining it to her. I want to tell her, ‘This guy's no good.’ But I have to. And choose presents for him sometimes which is the worst thing possible. ‘Papa what do you think he’ll like?”He’ll like this (imitating a punch) on him’.”

When David Letterman asked him about the C-Gang, Shah Rukh Khan said, “You see, we’d seen Grease and you know T-birds and leather jackets. And so we all decided to get ourselves jackets. We formed a gang in school and we pretended we were those guys. And that we could dance and sing and girls fell for us and like we were really cool. But I think nobody took us seriously. It was just a gang. And then we made it very exclusive. We made a laminated badge which was very difficult to make and I remember wore Nike with a grey swoosh, a white shirt, and blue jeans, with a ‘C’ written with your hand here. And we would dress up the same. We would walk on our toes. And we would go to parties and speak lingo which we kind of made ourselves. ‘How’s it hanging, man? Yeah, cool. Yo, what?’

The actor also revealed that at the age of 15, he went to Mumbai with his gang to look for Gauri Khan, who had moved there. The catch was that he didn't know anything about her other than the fact that she liked to swim. So, in order to find her, he hit the beach and thought he could find her there. Much to his surprise, there were several beaches in Mumbai and SRK did not know that. So, he visited the beaches along with his gang and after much ado, he finally heard Gauri's voice and she asked him, "What are you doing here?" Now that's one iconic story. Isn't it?

“I think it’s so completely intangible, this kind of stardom. So I am alien. I always tell everyone I’m an employee of the myth of SRK. So I work for that myth. For me also it is mythological. “Why are these people standing here while I’m waving? “It’s awkward for me to blow flying kisses. I am a very shy person. So is Gauri. To do this and have these extra over the top actions and all for me it’s’ like Freddie Mercury did it, not me. But I have to do it as the employee of this myth.”

Even after years of the release of the film Dilwale Dulhania Le Jaayenge is still screened at Maratha Mandir in Mumbai. Talking about the film, Shah Rukh said, “We (director Aditya Chopra and lead actress Kajol) were just a bunch of kids who made something we really liked. But we had a lot of fun doing it. We finished it in 50-60 days and people loved it for 20 years."

The actor, who had a horse-riding sequence in the 2001 film Asoka, recalled how he had a tough time dealing with the horse. SRK revealed that the horse would not start at first and when it did, it just wouldn't stop and the actor had to ride it for a couple of minutes. This explains why you wouldn't see the actor riding a horse in most of his films.

When Mr. Letterman asked the actor for his views on the current American President Donald Trump, the actor said, "Let me say it as politically correct way as possible. We look up to America. As Indians, we aspire to be there. But we are like okay with you. Maybe you guys deserve it." SRK's answer surely cracked David Letterman up.

Also Read: Shah Rukh Khan: I found myself ugly the first time I saw myself on the big screen