Many celebrities are very outspoken on social media. One of them is actress Richa Chadha who recently called out trolls who constantly send her rape and death threats. Days after Richa condemning Hindutva and the supporters who constantly harass her on social media, Bollywood has come out in support of her. Farhan Akhtar, Swara Bhasker, Pooja Bhatt, Pulkit Samrat are some of the actors who have taken a job at Twitter management. 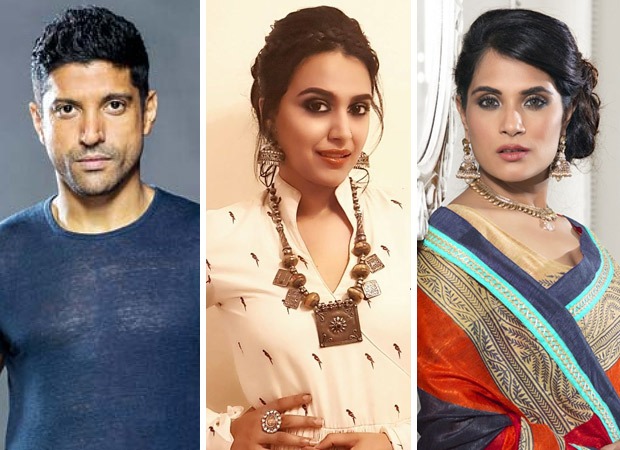 Filmmaker-actor Farhan Akhtar took to his Twitter to hit back Twitter for its mismanagement. He said that said rape and death threats should not be allowed or go unpunished on the micro-blogging site. "Top management at Twitter must re-group and decide what they would like their service to be remembered for. "If it is for good, then they need to get smarter in its regulation. Rape and death threats cannot be allowed or go unpunished. Twitter," said Farhan wrote on late Thursday night.

When Richa Chadha reported the account that was sending her threats, the social networking service responded saying, "No violation within context."

Besides Farhan Akhtar, Swara Bhasker, Pooja Bhatt and her Fukrey co-star Pulkit Samrat also came out to support her and slam Twitter for allowing this to continuously happen to women.

Hey tweeps!Don’t care about the targeted abuse because there’s a lot of unemployment in the country rn,if someone needs to work for ₹10 per tweet,I don’t judge them.But RAPE AND MURDER threats?Come on @TwitterIndia @Twitter pic.twitter.com/1AS8wlUPWg

You must report this. Twitter needs to take responsibility for this. They cannot provide a platform to people who openly threaten to rape and maim women.

Top management at Twitter must regroup and decide what they’d like their service to be remembered for.
If it’s for good, then they need to get smarter in its regulation. Rape and death threats cannot be allowed or go unpunished. @twitter @TwitterIndia

Scumbags! @TwitterIndia should do something about such openly threatening tweets!
Riches.. u define superwoman for me! ???????? @RichaChadha https://t.co/J5Fy98AEvG

The kind of abuse and slander @RichaChadha is facing on #Twitter amounts to harassment quite clearly.. @TwitterIndia @Twitter u wanna take some action and block these accounts that clearly violate ur community standards! Shame on this filth and u stay strong Richa! ❤️ pic.twitter.com/DfTckAE4U2

Ranvir Shorey alleges he was abused by Pooja…